Home > About > Our History 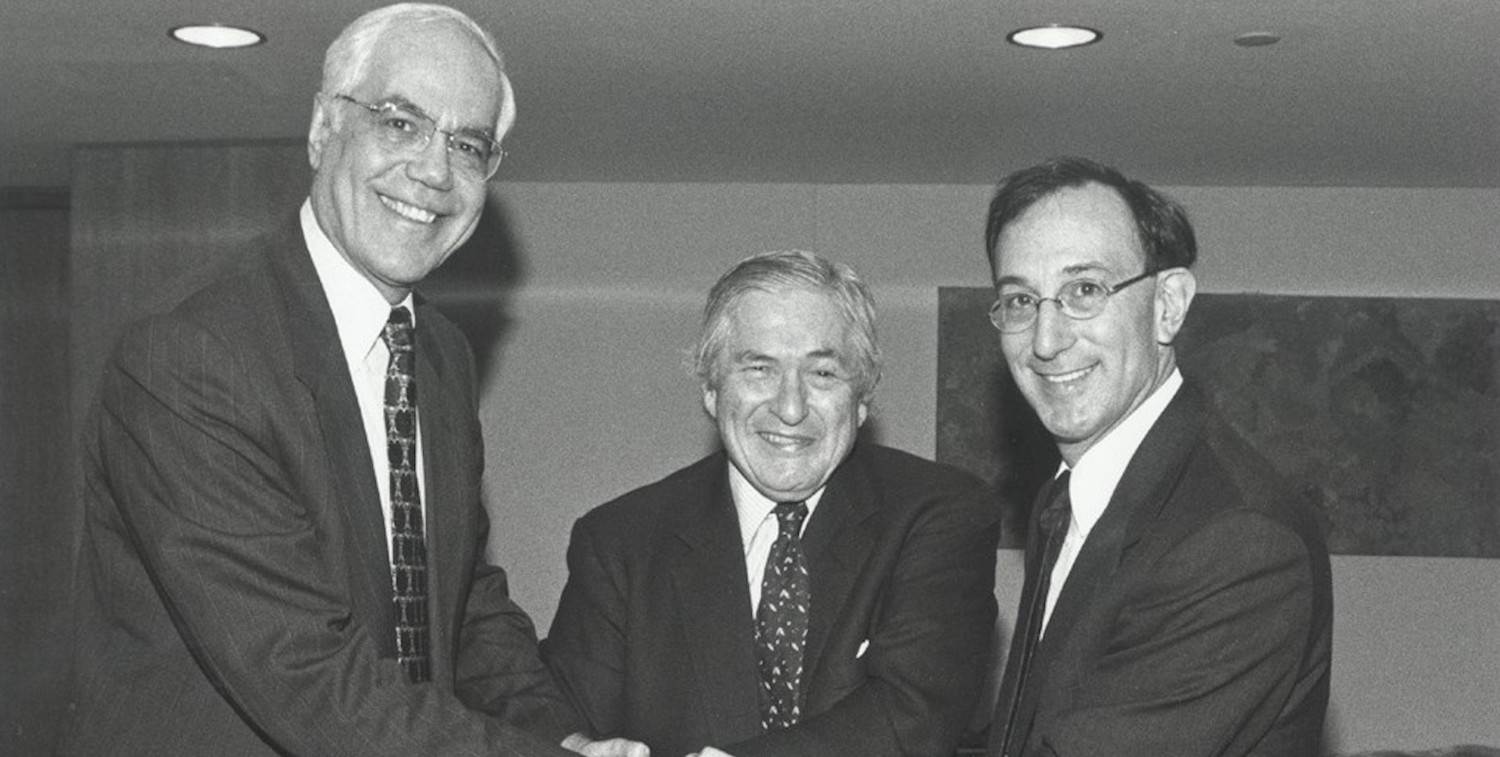 Caption:
Mohamed El-Ashry of the Global Environment Facility, James Wolfensohn of the World Bank, and Peter Seligmann of Conservation International at CEPF's founding.

The idea that would become the Critical Ecosystem Partnership Fund was hatched in 1996. Conservation International’s (CI) founding CEO, Peter Seligmann, and his friend James Wolfensohn, who had just been named president of the World Bank, were in Jackson Hole, Wyoming, on a fishing trip when they started to form the plan.

“We agreed that the [World] Bank could play a bigger role in protecting biodiversity and building civil society,” Seligmann recalled later. “So Jim asked me to put something down on paper about how that could work. I went back to D.C. and wrote something up.” (See interview on pages 5–7 in “The Critical Ecosystem Partnership Fund at 10: Investing in Life.”) Wolfensohn proposed forming a partnership with other organizations, with Conservation International and the World Bank each contributing US$25 million to kick things off.

In 2000, CEPF was launched, with the Global Environment Facility joining CI and the World Bank as founding donors. For the launch event at the World Bank Offices in Washington, D.C., CI presented a short film, “Hotspots: Protecting Earth’s Most Endangered Treasures.”

In 2001, the John D. and Catherine T. MacArthur Foundation became part of the partnership, followed by the Government of Japan in 2002. In total, the first five donor partners committed US$125 million over five years.

It was decided that CEPF would focus on the world’s biodiversity hotspots, described as Earth’s biologically richest and most threatened terrestrial ecoregions in a 2000 article in the journal Nature that was authored by scientist Norman Myers and conservationist Russell A.  Mittermeier. Under the leadership of Mittermeier, who was CI’s president, the biodiversity hotspots became a major focus of CI’s conservation efforts as the backbone of its “Save the Hotspots” and “Future for Life” campaigns.

A very large volume describing in detail the biodiversity hotspots of the planet with their precise delineation came out in 1999, authored by Myers, Russ Mittermeier and Cristina Mittermeier. This first volume, “Hotspots,” was followed by a revised version in 2005 authored by Russ Mittermeier, Patricio Robles Gill, Michael Hoffman, John Pilgrim and Thomas Brooks, under the title “Hotspots Revisited.”

In 2001, CEPF began five-year investments in four biodiversity hotspots: Cape Floristic Region, Madagascar and the Indian Ocean Islands, the Guinean Forests of West Africa, and the Tropical Andes. CEPF’s staff analyzed scientific data and met with local stakeholders and experts on the hotspots to identify the highest priorities. They then developed CEPF’s first ecosystem profiles for these hotspots, laying out in greater detail where CEPF would invest within each hotspot and what conservation strategies would be supported.

To ensure that the work would continue well into the future, the organization supported civil society organizations—nongovernmental organizations, communities, Indigenous peoples organizations, universities and small businesses—to develop their skills and capacity. Empowering local people to conserve biodiversity and ecosystems for the long run became a CEPF hallmark.

The program gradually extended to more and more hotspots. (See where CEPF has invested.)

CEPF’s approach to ecosystem profiles also evolved over time, becoming a year-long participatory process involving hundreds of experts and local stakeholders, and led by an organization or several organizations who receive a grant to produce the profile.

An evaluation leads to a renewed and growing partnership

In 2006, as some of the initial donor commitments were winding down, CEPF’s donor partners began discussing the future of the fund, and they commissioned an independent evaluation. The study found that CEPF had made strong progress:

"The donors have launched a very promising and special program in CEPF. This innovative model fills a unique niche in international biodiversity conservation and is being implemented by a very professional global team plus partners who have made excellent early progress towards their long-term goals. We have no hesitation in recommending that the donor partners continue funding the program and seeking further expansion opportunities." (Wells, Curran, and Qayum 2006)

In October 2012, the global partnership expanded again, as the European Union pledged 18 million euros to CEPF. “We see CEPF as a key mechanism for reaching local communities, civil society organizations and private sector actors in the world’s biodiversity hotspots who are eager to conserve their natural wealth,” said Janez Potočnik, then the European Commissioner for Environment, quoted in a press release announcing the contribution. “We value the efficiency and effectiveness CEPF has demonstrated over the last 12 years in building capacity of civil society to implement conservation projects that support critical ecosystems and enhance the livelihoods of local communities.”

Since that time, CEPF global donors have continued and renewed their engagements with CEPF, while the partnership has also worked with a variety of regional donor partners, including the MAVA Foundation, Margaret A. Cargill Philanthropies, and The Leona M. and Harry B. Helmsley Charitable Trust.

In 2018, after a change in its strategy, the MacArthur Foundation completed its commitment to the partnership.

The support the partnership has provided over the years has enabled CEPF to invest in 24 of the world’s biodiversity hotspots so far, committing more than US$243 million in grants to more than 2,500 civil society entities that are working to conserve biodiversity, strengthen civil society organizations and encourage sustainable development. Learn about our grantees’ achievements.