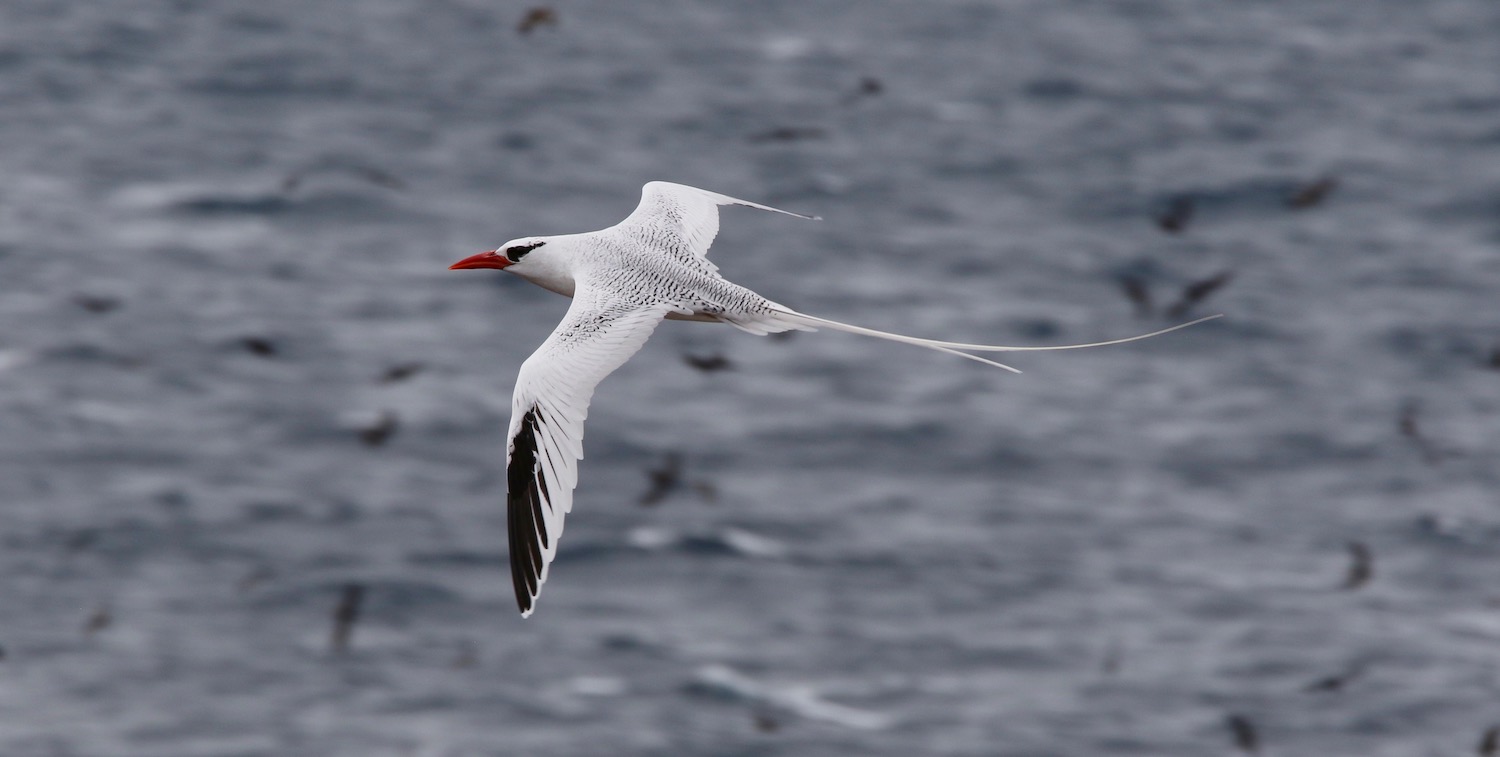 Photos of wildlife in motion, like this red-billed tropicbird in the Galapagos, are more difficult to capture, but can be very compelling.
© O. Langrand

How to Take Great Project Photos

No fancy camera? No problem!

Olivier Langrand is CEPF’s executive director and a preeminent ornithologist (he’s seen almost half of the world’s bird species!), but did you know he’s also an avid photographer? At age 10, Langrand inherited his first camera from his grandfather, and he’s been out in nature, capturing images of species and ecosystems, ever since.

To kick off CEPF’s 2020 photo contest, we sat down with Langrand to find out what advice he’d give to CEPF grantees on how to take photos that help share the story of their work.

How to take a good wildlife photo

The most important rule of photographing wildlife in nature is to keep a respectful distance. The reasons are two-fold. First, you don’t want to disturb the subject. If you get too close to baby birds in the nest, for example, you may compromise their survival.

Even with insects, you want to take care not to damage their habitat. “No photo is worth the destruction of nature, even a small element of nature,” Langrand said.

The second reason is that a stressed animal doesn’t make for a good photo anyway. According to Langrand: “You don’t want an image of an animal that looks frozen because it’s scared of your presence." 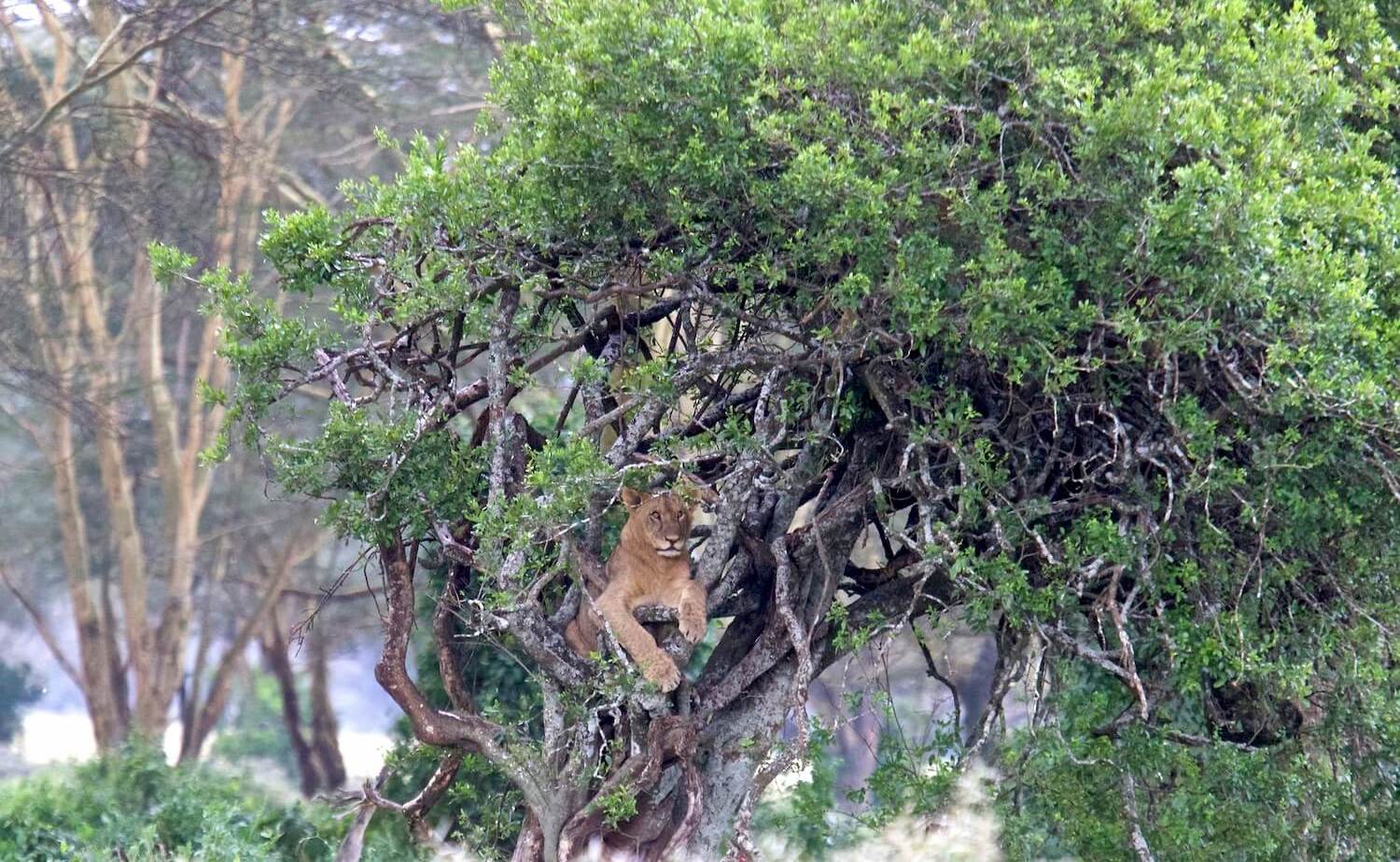 Caption:
This photo of a lion in Kenya is taken zoomed out, giving the viewer more context of the overall scene.
Credit:
© O. Langrand

In many instances, a cell phone camera can work surprisingly well for taking shots of wildlife, especially reptiles, amphibians and butterflies (if they aren't in motion). But for certain species—birds, in particular—a telephoto lens is needed for a close-up shot. If you don’t have a powerful lens, don’t discount the value of images taken from further away. “Give space. You want to show the animal in its habitat,” Langrand said. “That context can be helpful and pleasant for the viewer.”

If you’re taking photos of a captive animal or a cultivated plant, that’s fine, but be honest about it. “There is no shame in taking a photo in a zoo or in a botanical garden as long as you disclose it,” he said.

No matter where you are or what kind of camera you have, you need to get at eye level. Yes, this means you’ll often need to get down on your knees, or even your stomach.

“People may look at you strangely when they see you flat on your belly, taking photos of a flower, but that’s how to get the best possible image,” Langrand said. 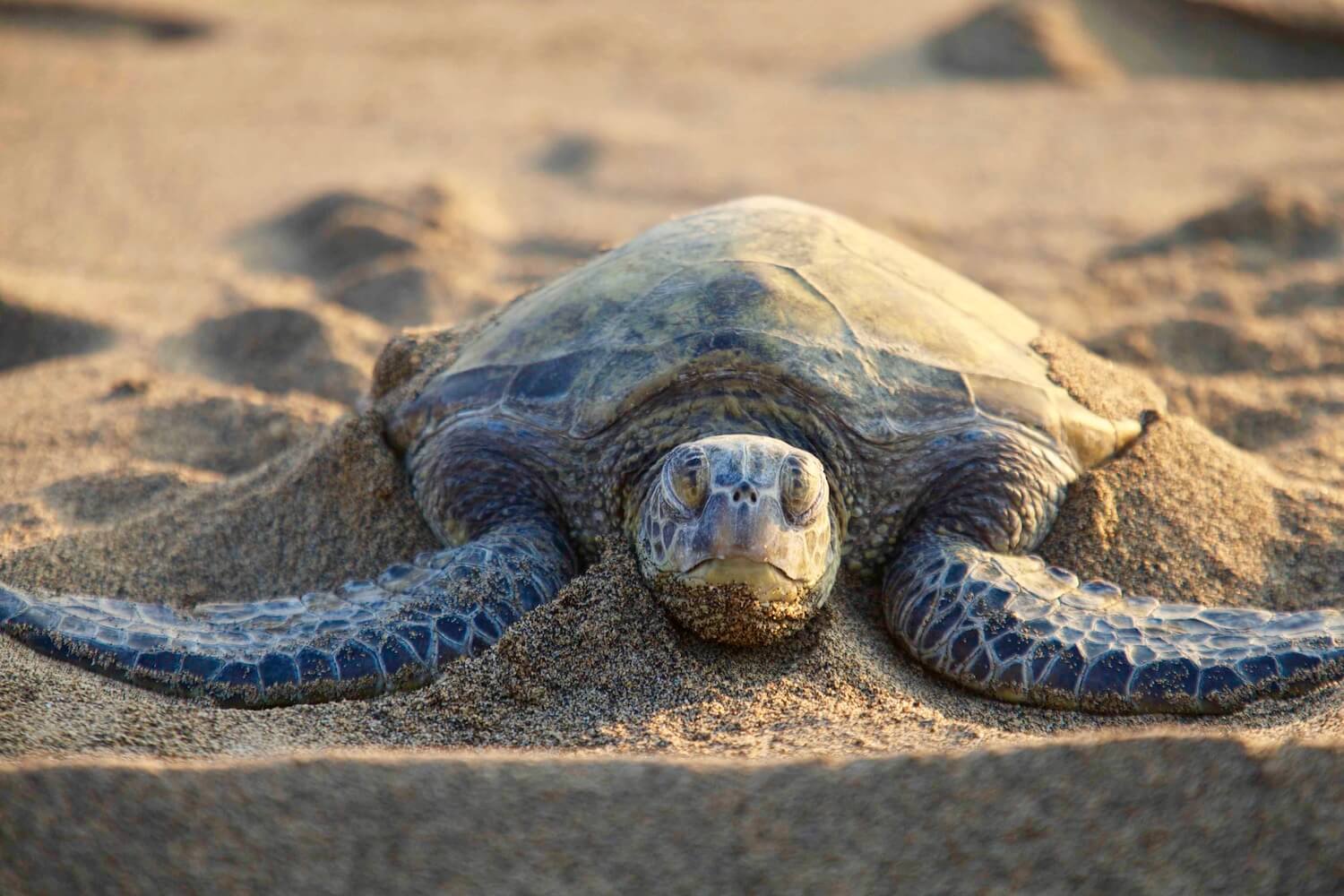 Caption:
Langrand got as low as possible to capture this image of a green turtle in Hawaii.
Credit:
© O. Langrand

How to take a good landscape photo

Great landscape images can be easily captured using almost any type of camera. The challenge is showing scale.

To really give a sense of the vastness of a vista or the enormity of a mountain range, try to include something else in the image—a house or a person, perhaps. This gives the viewer something to measure with. 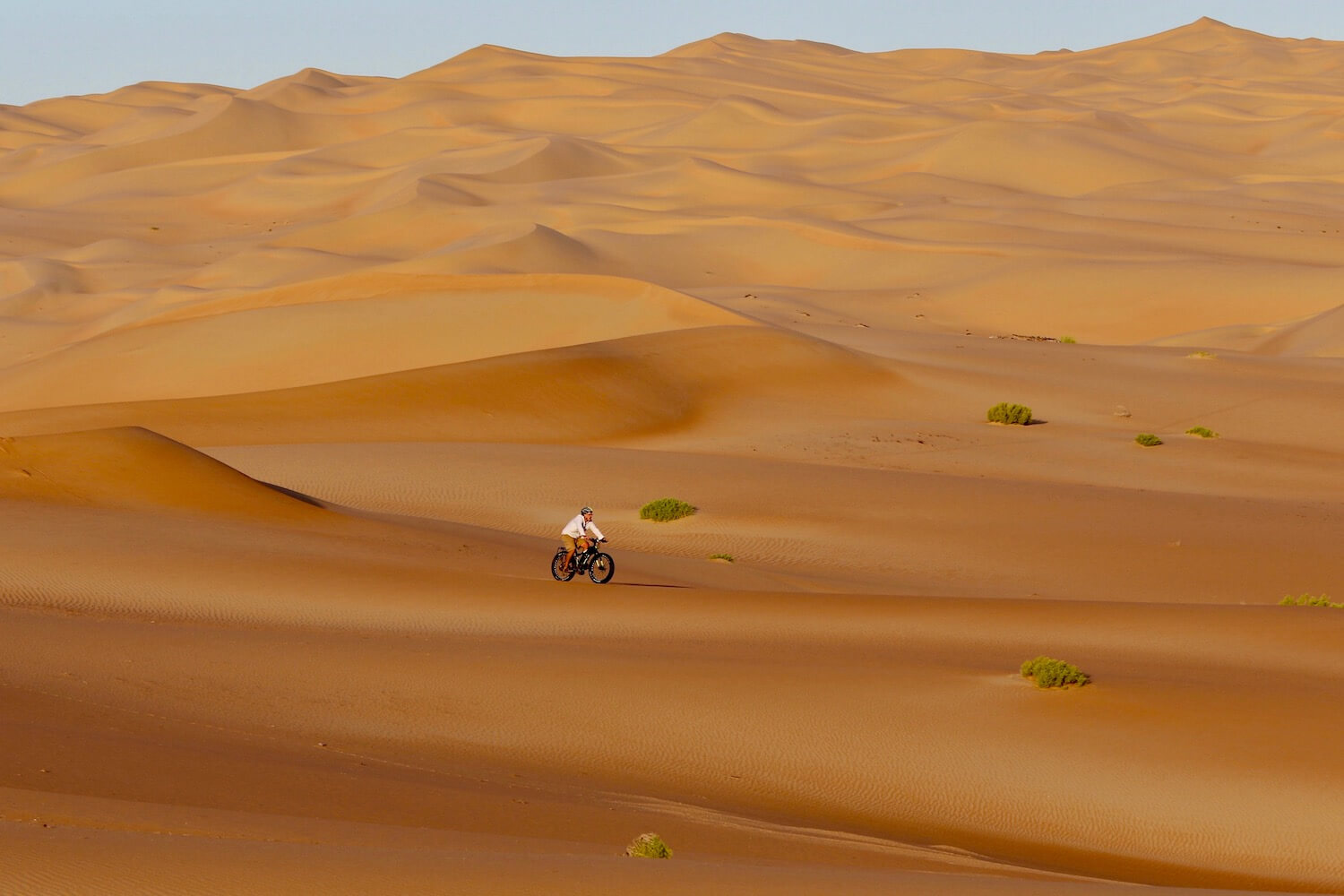 Caption:
The cyclist helps illustrate the vastness of these sand dunes in the United Arab Emirates.
Credit:
© O. Langrand

How to take a good people photo

Similar to species, you want to keep a respectful distance from people—getting too close with a camera may make a person uncomfortable. It may also be necessary or culturally appropriate to ask for their permission. (If you are denied this permission, opt to enjoy the moment and keep fond memories instead.)

Many photos of conservation in action show people from behind but, whenever possible, show people’s faces instead. You want to see their expressions.

Then, when framing a photo, focus on the eyes. “The eyes are what reflect personality and they need to be focused and crystal clear,” Langrand said.

Action photos tend to be more powerful and tell a better story than posed shots of people standing still, smiling. Be wary of hats, too, as they can cast a shadow on a person’s face. If appropriate, Langrand will request that subjects remove their hats for this reason.

When light is low, you may be tempted to use the flash setting.

“Flash is a very interesting accessory if you know how to use it. Direct flash is never good, you have to use it indirectly,” Langrand said. “Otherwise, your subject looks like a rabbit standing in the headlights of your car at night.”

If you don’t have a sophisticated camera or you’re not sure how to use the flash indirectly, Langrand suggests avoiding it altogether and opting for the natural, low light instead. Today's cameras, including the latest generation of smartphones, do well in low-light conditions. 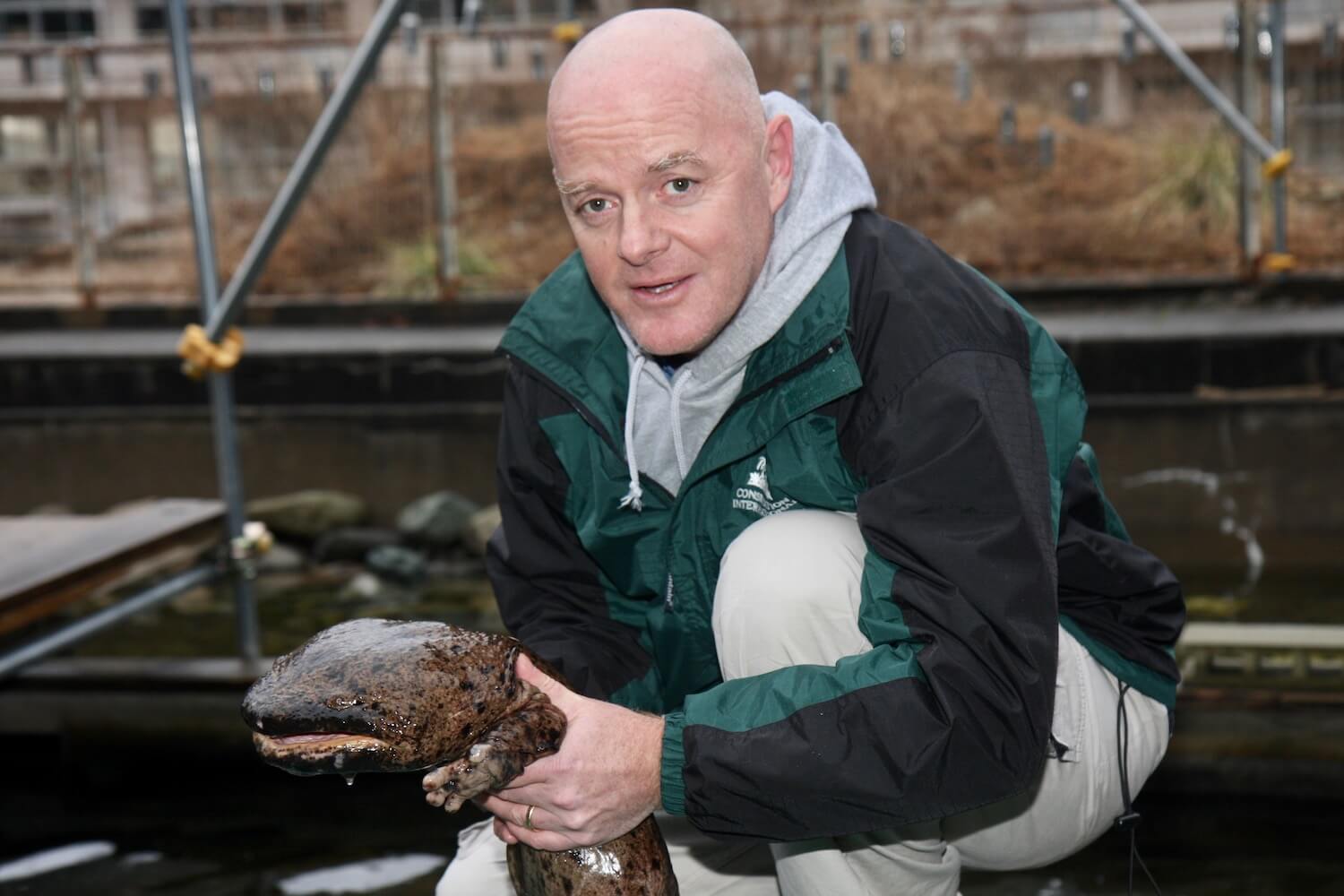 Caption:
Not only are the subject's eyes the focus in this image, there are also helpful context clues: the Japanese giant salamander, of course, and also the Conservation International logo on the jacket.
Credit:
© O. Langrand

How to take a good group photo

We’ve all been in a group photo when there are five different people pointing cameras at you, and you have no idea where you should look.

“Try to discipline people,” Langrand said. “One photo taken from one person at a time!” This way, you’ll have all eyes—remember, the eyes are critical—going in the same direction.

It’s also helpful to provide some context by having an event banner or something else within the frame that gives context. 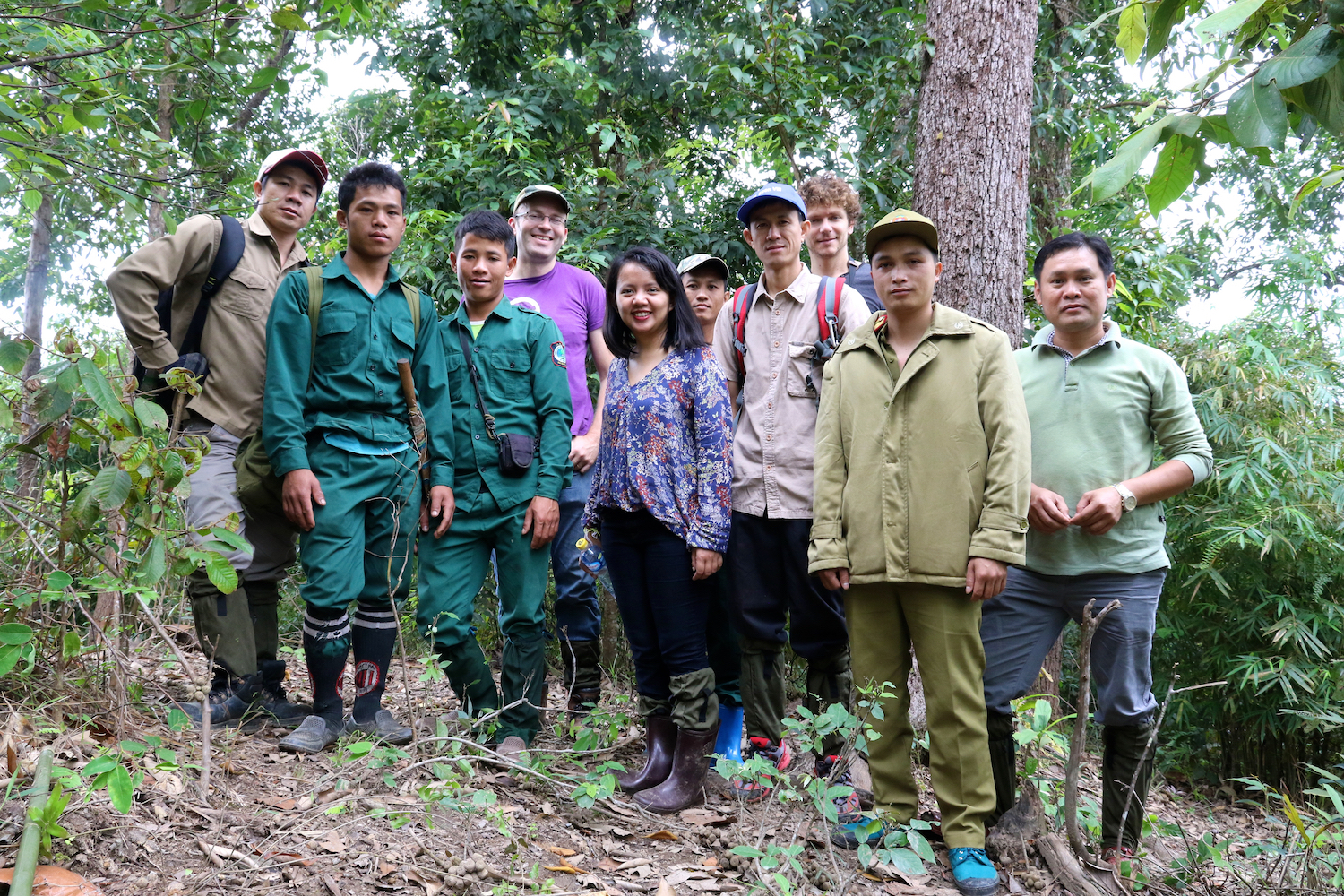 How to take a good meeting photo

Meetings and workshops are an important component of conservation—CEPF funding often goes toward such events. It’s often challenging, though, to convey the energy, collaboration and progress that’s happening inside a starkly lit conference room.

To overcome this obstacle, Langrand searches for moments during a meeting when something different is happening. Two people congratulating each other, for example, or an interactive activity when people are up and out of their seats.

“Think about what you want the photo to convey to an external audience,” Langrand said. “A photo of Post-it Notes on a wall is not that exciting to someone who wasn’t at the meeting. But a photo of people discussing what’s on the wall of Post-it Notes? That’s better.” 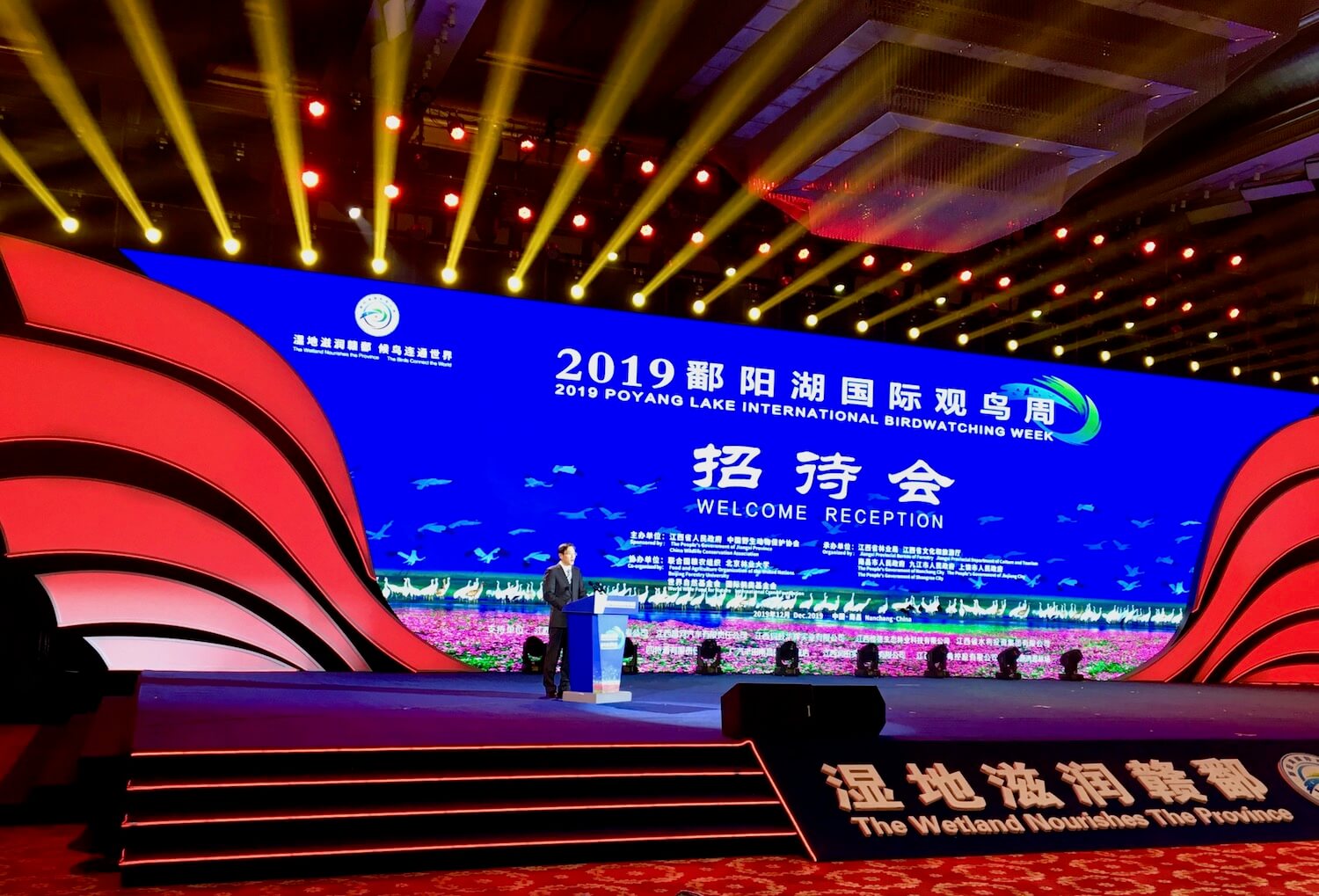 Caption:
Like with species, sometimes event photos benefit from zooming out. You gain more context from this photo than you would if Langrand had zoomed in on the speaker.
Credit:
© O. Langrand

Today, photos of your conservation work are more essential than they've ever been. “People read less, but they do read when text is supported by visuals,” Langrand said. “So if grantees want their projects to be recognized, text is not sufficient.”

With digital cameras and smartphones, photography is more accessible than ever. (No more waiting two weeks for your film to be processed and returned in the mail, as was the case when Langrand first began taking photos.)

The challenge that comes with the convenience of digital photography is that you must have the "courage," as Langrand puts it, to delete photos that aren't well lit, are poorly focused or that are similar to other images. "Select the best shots that you are really proud of," said Langrand. "Quality over quantity."

We look forward to seeing your best submissions for this year's photo contest. Good luck!