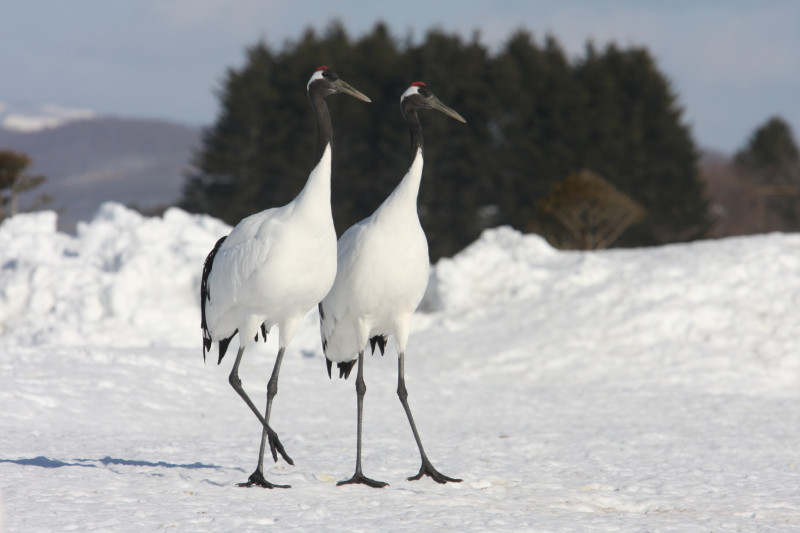 Japan is home to roughly 5,600 species of vascular plants, about a third of which are thought to be endemic. Among Japan's notable plants are a number of rare, endemic species that are well-known favorites in gardens, both in Japan and around the world in temperate climates. These include Shirane-aoi (Glaucidium palmatum) and Togakushis gouma (Ranzania japonica), found only in the high mountains from central to northern Honshu.

Nearly 370 bird species are known to occur regularly in Japan, although only 13 are endemic among which the Critically Endangered Okinawa woodpecker (Dendrocopos noguchii) and the Bonin white-eye (Apalopteron familiare). Japan also supports some important waterbird populations, including populations of the Endangered red-crowned crane (Grus japonensis).

Tragically, Japan has already suffered a crisis of bird extinctions, with a number of species from its southern Ryukyu Archipelago and the eastern Okasawara Archipelago, lost over the last two centuries. These include the Ryukyu wood-pigeon (Columba jouyi) and Bonin wood-pigeon (C. versicolor), the Bonin thrush (Zoothera terrestris), and the Bonin grosbeak (Carpodacus ferreorostris). All four of these extinctions were driven primarily by the introduction of exotic species, in particular of rats and cats.

Japan is home to only around 90 species of mammals, but about half of these are endemic to the hotspot. Sado Island, an island less than 1,000 km² off western Honshu, has one endemic mammal, the Sado shrew the Sado mole (Mogera tokudae).

One of the best-known mammals in Japan is the Japanese macaque (Macaca fuscata), the most northerly-living monkey in the world. A sub-species, the Yaku-shima macaque (M. fuscata yakui), is found only on the island of Yaku.

Japan has more than 65 reptile species, almost 30 of which are endemic. The reptile fauna includes a number of threatened species, the Endangered Ryukyu black-breasted leaf-turtle (Geoemyda japonica,) and Critically Endangered Kikuzato's brook snake (Opisthotropis kikuzatoi) among them.

Endemism is particularly high among amphibians, with 44 of 50 species found only in Japan. The amphibian genus Hynobius is very well represented, with about 15 of the 25 known species worldwide endemic to the hotspot, one of which, the Critically Endangered Oki salamander (H. okiensis), is confined entirely to Dogo, of the Okino-shima in Shimane prefecture.

The Japanese giant salamander (Andrias japonicus), found in western Honshu, Shikoku and Kyushu, can grow to more than one meter in length and is one of the world's largest amphibians. Once threatened by human consumption, the salamander is now considered a natural monument and protected by law.

Japan has nearly 215 native species of freshwater fish, more than 50 of which are endemic. While most inland waters are dominated by fishes entering from the sea, there is also a significant representation of strictly freshwater groups, including minnows (Cyprinidae) and loaches (Cobitidae and Balitoridae) that have diversified within the hotspot and account for nearly half of the endemic species and three of four endemic genera. The occurrence of five lampreys and four sturgeons from ancient lineages mean that Japan also holds a disproportionately large amount of the evolutionary history of fishes.

Some invertebrate groups are very well documented in Japan. For example, nearly 240 butterfly species are thought to be native to Japan (although this includes naturalized species), and nearly 25 species of tiger beetles are recorded from the hotspot (about a quarter of which are endemic).