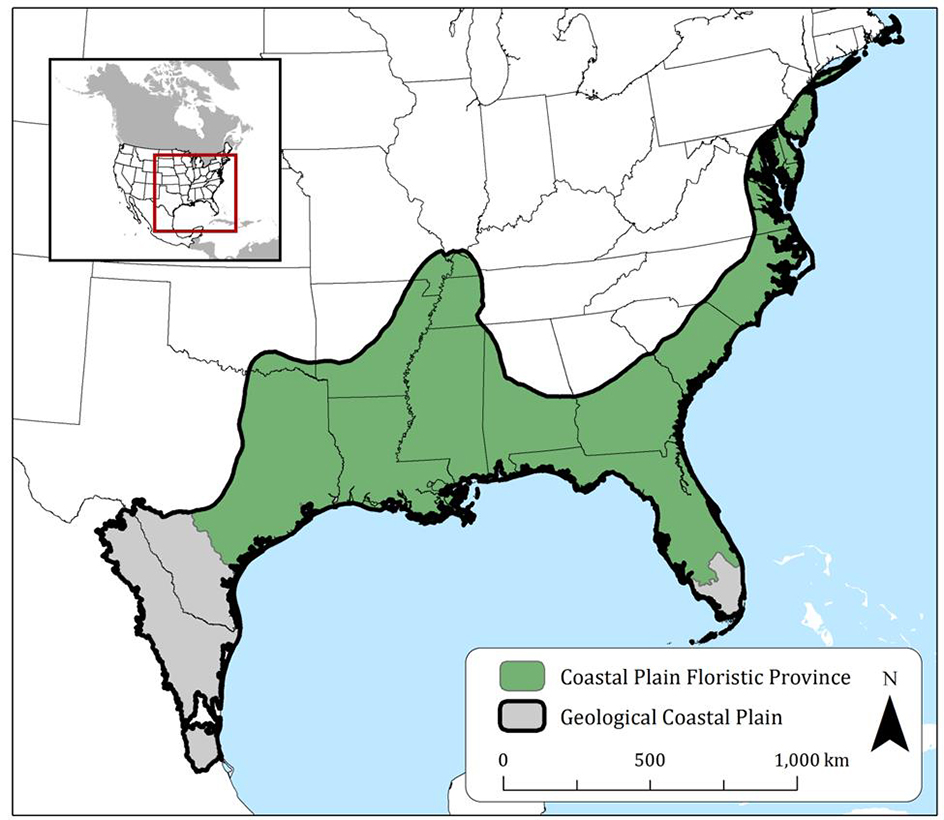 The North American Coastal Plain (NACP) – was recognized only recently as meeting the criteria for a global biodiversity hotspot: more than 1,500 endemic vascular plants and greater than 70 percent habitat loss.

Sometimes something precious is right under your nose, but goes unnoticed. Such it is that a region long explored by botanists and zoologists – the North American Coastal Plain (NACP) – was recognized only recently as meeting the criteria of Myers et al. (2000) for a global biodiversity hotspot: more than 1,500 endemic vascular plants and greater than 70 percent habitat loss.

Several myths and misconceptions prevented ecologists and conservationists from recognizing the biological importance of the NACP until now.

First, no one had gotten around to compiling lists of endemic taxa in the region to show that it is a hotspot. Second, as a flat and seemingly monotonous region, the NACP was assumed to lack the topographic and climatic heterogeneity that favors the evolution and retention of endemic taxa. Third, being low in elevation (lower than any of the 35 previously recognized hotspots) and coastal, the NACP was thought to have been frequently inundated during high sea-level stands of the Pleistocene and earlier.  Such inundation would presumably leave few refugia for species. The climate of the NACP also was thought to fluctuate dramatically over time.

Finally, the dominant terrestrial vegetation across much of the region, pine savanna, was until recently considered a successional stage of mixed hardwood forest, the assumed climax vegetation. Furthermore, the fires that maintain pine savannas were thought to be human-caused; hence, the ecosystem could not be older than 13,000 to 14,000 years, when humans arrived in the NACP.

Several studies converged to overturn these myths and demonstrate the biological richness of this region.

At the same time, reconstructions of past climates based on fossil pollen and other evidence, especially in Florida where the continuous fossil pollen record extends back 62,000 years, show remarkable climatic stability over long periods. Grimm et al. (2006) described a Pleistocene flora similar to today’s, with no identified northern taxa. Sea-level fluctuations also appear to have been less extreme than previously assumed, leaving many upland refugia during high sea-level stands of the Plio-Pleistocene (Noss et al. 2015). Moreover, these areas of high ground, surrounded by water or, later, by the many river valleys that course through the NACP, were key sites for speciation of endemic taxa.

The environmental heterogeneity of the region is also much higher than usually assumed, with nine of 12 major global soil orders and with soil pH ranging from 3 to 8.5 (Noss et al. 2015). Especially important for plant species richness is that vegetation and floristic change occur rapidly along subtle elevation gradients. The frequent fires ignited historically by the highest lightning frequency in North America, north of Mexico, reduce competition and foster high plant species richness. Therefore, the pine savannas and other pyrogenic vegetation that dominate most of the NACP, especially the richest southeastern portion of the region, are ancient ecosystems maintained by natural processes, not creations of humans wielding torches (Noss 2013). Indeed, fire-dependent ecosystems in the NACP have analogs extending back to the Eocene (Graham 1999).

Finally, at the same time that Noss et al. (2015) were compiling the information that documents the NACP as a global hotspot for plants and several other taxa, Mittermeier et al. (2015) showed that one of the major global hotspots for turtle species richness and endemism occurs within the southeastern portion of the NACP. Recent tallies of endemic taxa among several groups now demonstrate conclusively its global significance (see table below), and ongoing studies of endemism in other groups, including ants, grasshoppers, and lichens, also indicate hotspot status for the NACP.

On the negative side of the hotspot equation, current analyses indicate that 85.5% of the natural vegetation of the NACP has been highly altered or converted to anthropogenic land cover, with the greatest losses among grasslands, savannas, woodlands, marshes and glades (Noss et al. 2015).

The human population is exploding across most of the NACP, which combined with rapid sea-level rise and loss of historic dispersal corridors, places biodiversity in this region at high risk. Conservation priorities for this newly recognized hotspots include reducing population growth and urban sprawl, identifying climatic refugia and biodiversity hotspots at a finer scale across the region, protecting these key areas in new reserves, maintaining and restoring movement corridors, and restoring or mimicking natural disturbance (especially fire) and hydrological regimes.

TABLE: Richness and endemism of native vascular plants and vertebrates, including infraspecific taxa and (in italics) full species within the North American Coastal Plain (Geological Coastal Plain).
Endemic = 90% or more of distribution occurs within the region.