With a grant from CEPF, the Society for Cave Biology (Društvo za jamsko biologijo) pioneered a method of testing for DNA in the very water that flows out of cave systems using known olm salamander habitats in Slovenia.

When you look at the olm (Proteus anguinus, VU) you might not see a giant, but the 12-inch-long, pinkish salamander is the king of its world. It rules the lightless realm of the Balkan Peninsula’s Dinaric karst cave systems. In fact, the olm is the largest exclusively cave-dwelling animal in the world.

The mostly-blind, aquatic amphibian doesn’t look like a top predator, but the only natural threat to olms is other members of their species. Due to the low-energy habitat in which they evolved to live and the extremely low metabolism that sustains them, olms can live up to 100 years if they are not killed in a clash with a rival over territory.

The tracking of olm populations is important because the porous stone of the cave systems they inhabit is especially vulnerable to pollution, and once a karst cave system is polluted it is almost impossible to decontaminate. In this way, the sensitive olms act as a canary in the mine; the groundwater from the caves is the only reliable source of drinking water in the karst region, and diminishing olm populations can indicate a problem with the water.

However, because the cave systems in which they live are so difficult to access, the world of the olm is largely impenetrable to researchers. Due to this inaccessibility, a lot of the information that could help the conservation community help the olm remains in the dark. Even the number and locations of olm colonies within the area’s cave systems are mostly unknown.

To work around the issue of the olms’ inaccessible habitat, the organization Društvo za jamsko biologijo (in English, the Society for Cave Biology - SCB), developed a new technique to detect the presence of these elusive animals. With a grant from the Critical Ecosystem Partnership Fund (CEPF), the SCB pioneered a method of testing for DNA in the very water that flows out of the cave systems using known olm habitats in Slovenia. 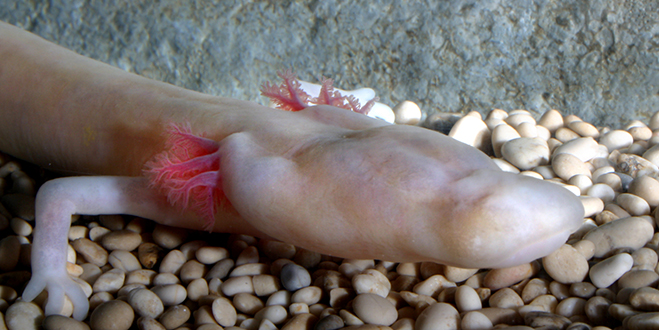 Aquatic vertebrates constantly shed skin cells, and these cells break down in the water, creating detectable traces that have been called environmental DNA, or eDNA. Using this newly-developed method of detection, the SCB detected nine new olm populations as well as nine possible new olm locations in Bosnia and Herzegovina. The study even found possible olm populations in Montenegro, the first ever evidence of the presence of olms in the country.

Because of the Balkan region’s love for the olm (an olm even appeared on a Slovenian coin prior to the introduction of the Euro to the country in 2007), communities around the area were engaged to help protect the tiny giant’s habitat. Educational leaflets were distributed, informational billboards were put up and a lecture tour was held, all focusing on water management methods, threats to groundwater and the role that olms play in the future of the karst region’s water resources.

Communities around the Balkan Peninsula hold the future of the olm in their hands, and the strong support that the SCB has felt for this project throughout the area has reassured them that local residents are up to the task.

Read more about the recent search efforts for olms in Slovenia.