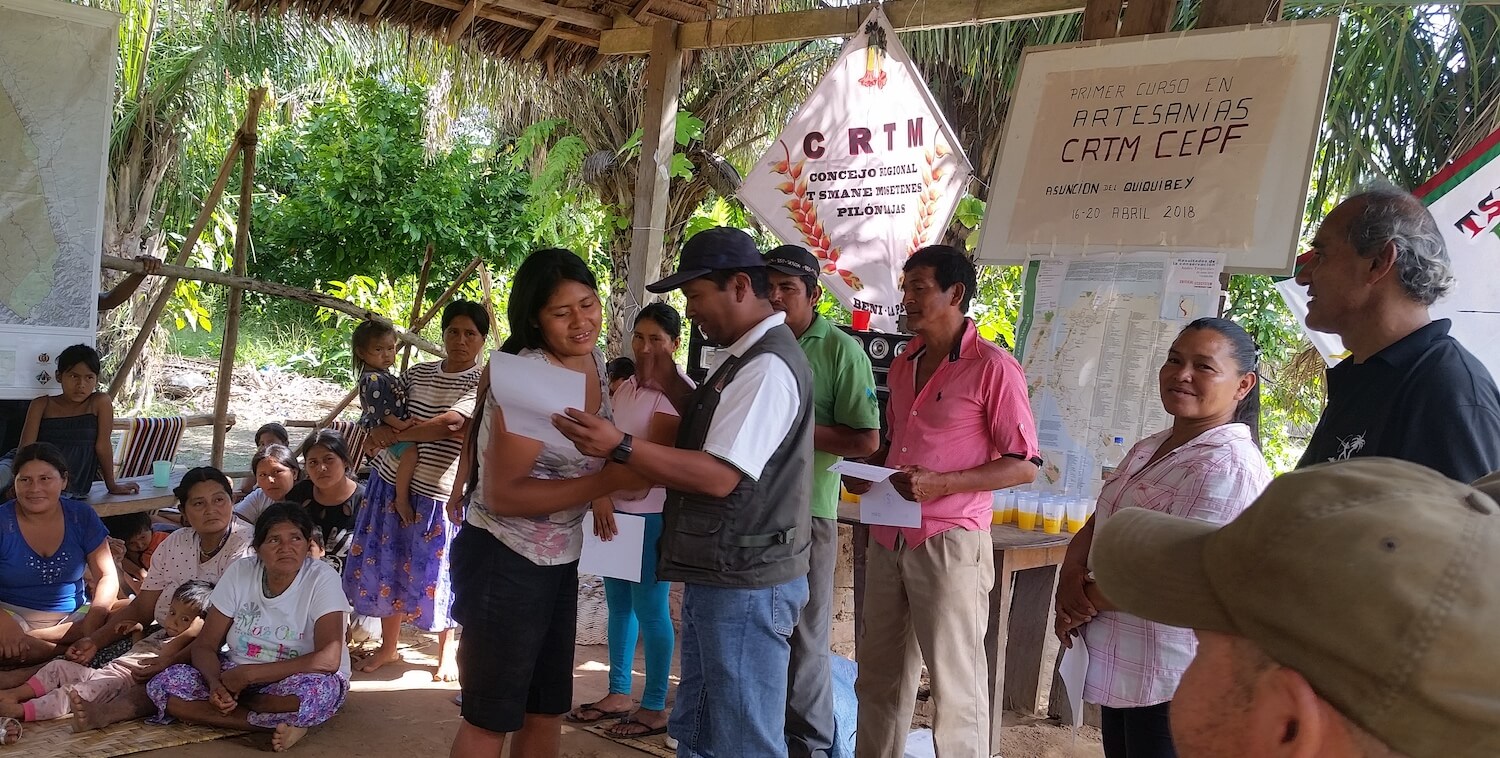 Awarding certificates to participants in a weaving course in Asuncion del Quiquibey, an activity that was part of the management plans for Pilón Lajas.
© Charles Ebelio Romay Mérida

This story first appeared in the CEPF 2020 Impact Report.

Pilón Lajas, recognized as a biosphere reserve by UNESCO in 1977, was declared an Indigenous territory by the national government of Bolivia in 1992. At that time, the multiethnic Tsimané Moseten Regional Council (CRTM) was formed, and in 1997 they received title to the land.

The reserve—which contains the 249,845-hectare Yungas Inferiores de Pilón Lajas Key Biodiversity Area (KBA)—is renowned for its exceptional biodiversity, hosting an estimated 2,000 to 3,000 species of plants, 73 species of mammals, 485 species of birds and much more.

Pressure on land and natural resources in the area is high, with agricultural invasion, colonization, illegal logging, hunting and fishing, and the potential for development projects posing serious threats to the reserve.

In addition, the reserve is extremely important for supplying water to numerous urban areas, including Rurrenabaque, one of the main cities in the department of Beni, and for crops and livestock in the region.

The establishment of the CRTM created an opportunity for the Indigenous people of the region to participate in decisions pertaining to their land.

Starting in July 2016, the CRTM used funding from CEPF to strengthen its organization in the areas of representation of women, legal status, technical and administrative capacity, and financial management. This positioned the group to focus on their long-term vision for the territory.

While the CRTM has played a role in the administration and management of the reserve over the past 25 years, it was not until 2017 that they were designated as co-managers of the reserve with the National Service of Protected Areas (SERNAP).

CRTM played a technical role in developing the long-term management instruments for the reserve: the management plan and “life plan”—which includes the Indigenous peoples land planning tool. The plans were completed in 2019.

Development of the management and life plans was undertaken with technical support from Wildlife Conservation Society-Bolivia and National Protected Areas Service (SERNAP), and entailed the participation of 23 communities of the CRTM and other communities of intercultural groups that live within the reserve.

The plans identify future priorities such as improved management of the Yungas Inferiores de Pilón Lajas KBA, scientific research, species conservation, sustainable resource management, use and distribution of benefits, identification of threats, and creation of alliances with various stakeholders in the region to further the conservation of the reserve.

Development of these plans is an achievement not only for the CRTM, the KBA and the Pilón Lajas Biosphere Reserve and Indigenous Territory, but also for Bolivia as a whole, marking the first time an Indigenous organization has led the updating of a national protected area management instrument.