Home > Stories > Saying Goodbye to One of CEPF's Founders

Mohamed El-Ashry of the Global Environment Facility, James Wolfensohn of the World Bank, and Peter Seligmann of Conservation International at CEPF's founding.

Saying Goodbye to One of CEPF's Founders

A tribute to James D. Wolfensohn

He lived an exceptional life. From a modest upbringing in Australia, James D. Wolfensohn rose to the top of international finance. He served as the president of the World Bank for 10 years, where he focused on poverty alleviation and waged a campaign against corruption. He was an Olympic fencer and an accomplished cellist, and he served as an officer in the Royal Australian Air Force. As chairman for New York’s Carnegie Hall and Washington, D.C.’s Kennedy Center, he played an important role in strengthening the finances of the revered arts venues.

With such a rich and interesting resume, it is perhaps not surprising that Mr. Wolfensohn, who passed away on 25 November at the age of 86, is less well known for his role as a co-founder of the Critical Ecosystem Partnership Fund (CEPF). Mr. Wolfensohn and Conservation International founder and former CEO Peter Seligmann launched CEPF in 2000, when Mr. Wolfensohn was president of the World Bank. 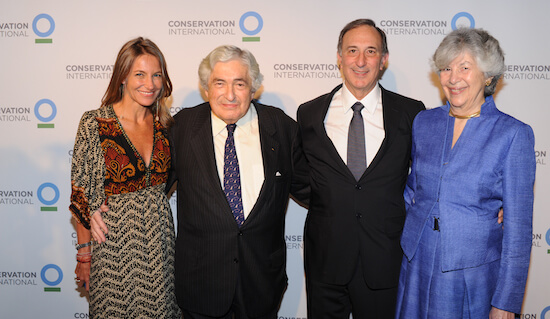 “Mr. Wolfensohn was essential to the establishment of CEPF,” said Olivier Langrand, CEPF’s executive director. “His sincere interest in making the world better combined with his keen understanding of finance, development and the role of civil society set CEPF and its grantees on a path to success. We owe him a debt of gratitude for his leadership and commitment to conservation.”

The idea for CEPF grew out of the friendship between Mr. Wolfensohn and Mr. Seligmann.

During an interview CEPF conducted with the two men in July 2010, Mr. Seligmann said they met at a dinner hosted by actor Harrison Ford. “I was really attracted, Jim, to your personal interest and passion for doing the right thing and finding the right path, and I thought, here’s someone who I could not only be a friend with, but someone who I could really partner with.”

On a fly-fishing trip in Wyoming, they formed the idea for a fund that would conserve the world’s biodiversity hotspots and strengthen civil society. They founded CEPF with $25 million commitments each from the World Bank, Conservation International and the Global Environment Facility (GEF), and the partnership grew from there.

“I knew the idea of the partnership was important because for me, it was probably the first of the new visible partnerships I had with civil society, when the bank was wholly distrusted by civil society, and what I was trying to do was to say that it was much better if we worked together,” said Mr. Wolfensohn in the July 2010 interview.

“We became the trusted financier for literally thousands of people around the world who are doing good work,” Mr. Wolfensohn said.

He went on to serve multiple terms as the chairperson for the CEPF Donor Council, helping to guide the fund through growth in its partnership and changes in the environmental threats and opportunities in the world’s biodiversity hotspots.

“I think growth, economic growth with degradation of the environment, in all its senses, has an implicit significant cost,” Mr. Wolfensohn said in a January 2010 interview with CEPF. “To try and distinguish between environment and economic activity is a false dichotomy. The two are linked. It may not be obvious immediately, but there is no question that what happens in the environment has an impact on the economy.”

“It's very important to engage local communities and civil societies in any form of conservation, because the notion of having some external body come in for a few weeks, a few months, a few years to address a problem is simply not consistent with the nature of the problem,” he said. “Any solution to a challenge in the environment has to be taken up by the local community.”

He and his wife Elaine, who passed away in August, were involved in many philanthropic and service endeavors, and their love of nature was reflected in their commitments, including Mr. Wolfensohn’s service as board member and board member emeritus for Conservation International.

They will be missed, but their positive impact on the world will be felt for generations to come.