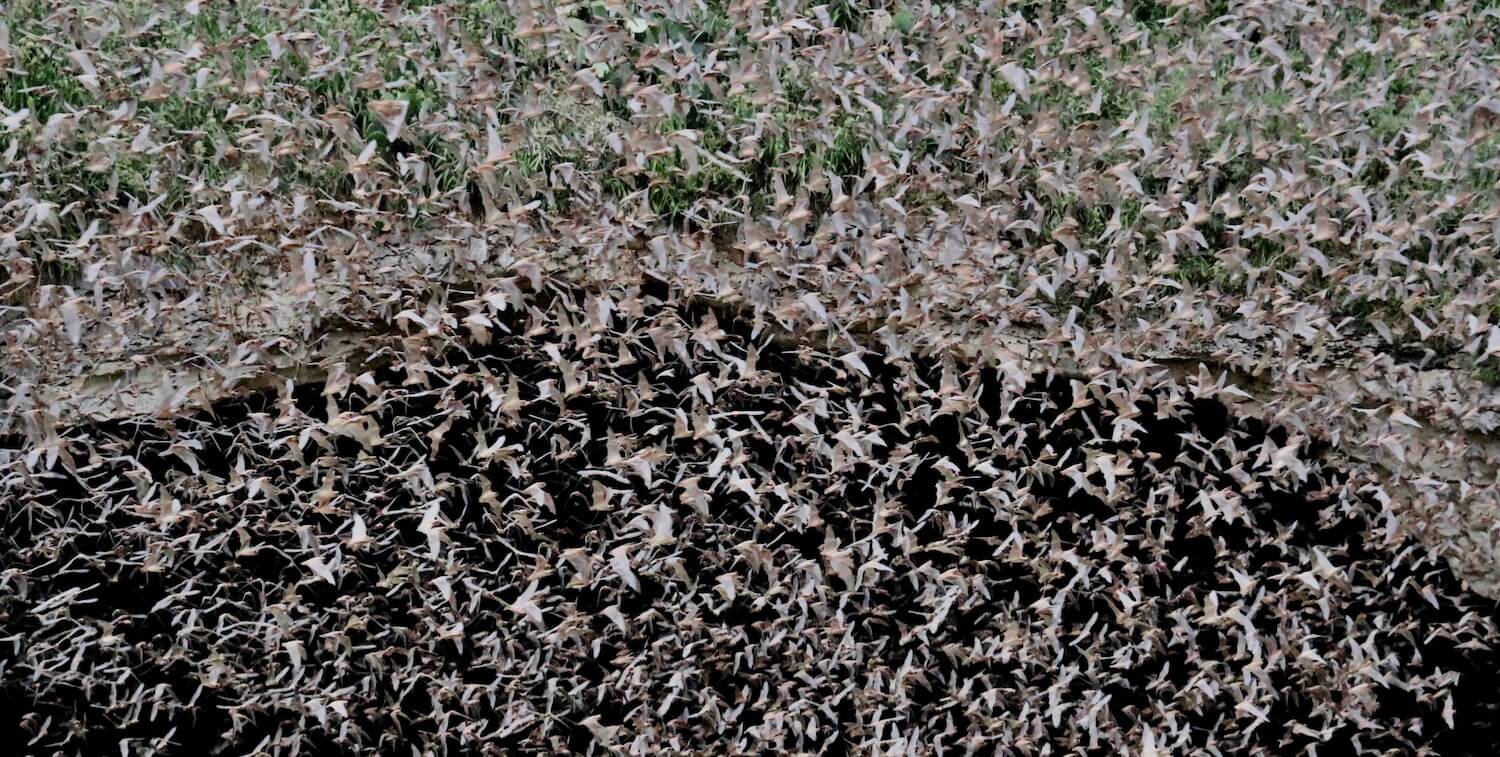 The next installment of our occasional blog series, “Celebrating Biodiversity,” in which we highlight incredible stories about biodiversity.

At the north-western limit of the North American Coastal Plain—the most recently described of the world’s 36 biodiversity hotspots—a cave harbors the largest concentration of non-human, warm-blooded mammals in the world.

Every spring and summer, Bracken Cave near San Antonio, Texas, becomes the home of 15 million Mexican free-tailed bats (Tadarida brasiliensis). This species, found throughout northern Mexico and the southern United States, has an estimated global population of 150 million individuals.

Fifteen million pregnant females take shelter in Bracken Cave. Soon after, the cave becomes the world’s largest bat maternity ward, with millions of young being born. There is not enough space in Bracken Cave for the males, so they reside in separate locations.

As dusk approaches, the mother bats spiral out of the cave—at an average of 50,000 individuals per minute—to go feeding in dense groups on moths and other insects above agricultural areas. They eat on average 4,500 tons of insects per month, making a huge contribution to agriculture productivity as most of the insects consumed are pests of crops.

I recently visited Bracken Cave and was fortunate to witness this amazing wildlife spectacle myself. For over an hour, a continuous flow of bats left the cave and disappeared over the horizon. Fifteen million bats, weighing 50 grams each. Thinking in terms of biomass, that is like a herd of 200 adult elephants vanishing into the Texas sky!

Outside of the cave, while the bats are exiting, all kind of predators are present: red-tailed hawk, Swainson’s hawk, Cooper’s hawk, Sharp-shinned hawk, along with snakes and carnivores. But none of them would risk going inside the cave. High levels of carbon dioxide and ammonia would kill any intruders and their bodies would never be found: The floor is teeming with millions of dermestid beetles that, in few minutes, would leave only a cleaned skeleton behind.

Mid-spring the female bats give birth—one to each mother. She’ll spend an hour with her newborn, memorizing its scent and vocalizations. In this way, she can find her youngster when she returns to the cave’s giant nursery, a dense carpet of pups on the ceiling and walls of the cave. Mother bats nurse their offspring twice a day.

After five weeks, the young bats start testing their flying skills. This is done in the complete darkness of the cave using echolocation to prevent collision with the many other rookie flyers. In late July, they will be ready to accompany their mothers outside of the cave to hunt for insects at night.

In 1992, Bat Conservation International—an Austin, Texas-based organization—bought the land where Bracken Cave is located and has been managing the site and the surroundings ever since, helping ensure this breeding ground stays protected and this stunning display continues.