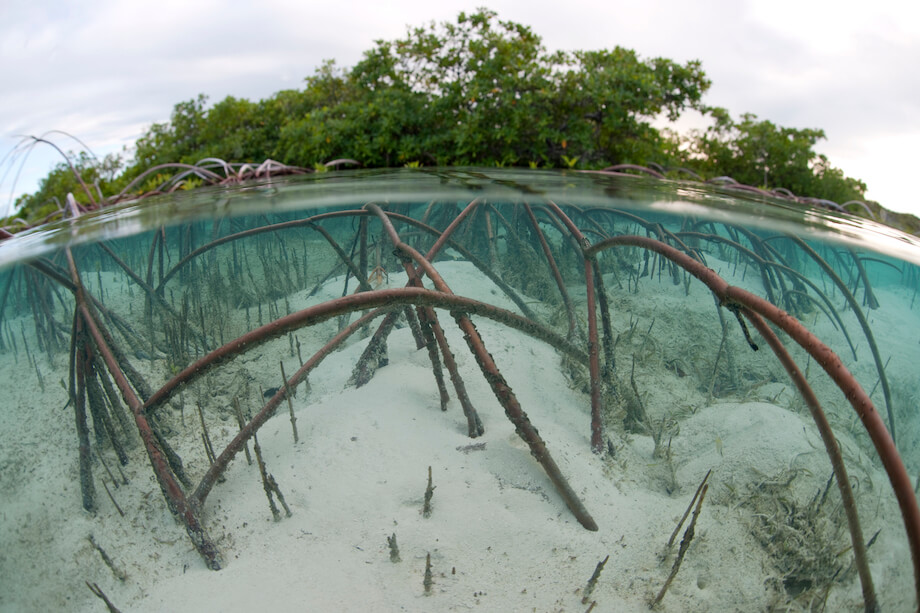 Beyond the many things that the diversity of life does for us, nature offers remedies to the negative impacts of climate change: it can help living things adapt; prevent future emissions by storing carbon; and offset some of the CO2 concentrations that are already changing our world.

Natural ecosystems can help people – particularly the poor in rural and urban areas – adapt to changes in our climate. Sustainably managed rivers, aquifers and floodplains can help ensure water supplies and regulate flooding. Healthy coastal ecosystems such as mangroves and wetlands temper the impact of storms. Thriving grasslands counter drought and flooding. Tropical forests provide wild reserves of food and income during failed harvests. The oceans absorb heat and CO2 from the atmosphere, helping to stabilize the climate.

Reducing or eliminating deforestation keeps carbon in living forest systems instead of adding to atmospheric greenhouse gas concentrations. At the same time, because a significant portion of the atmospheric greenhouse gas burden comes from the destruction and degradation of modern ecosystems, restoration of ecosystems at a large scale could pull as much as 0.5 degree Celsius of temperature increase out of the climate change equation. That is an impressive amount compared to the 0.85 degree Celsius of climate temperature increase already experienced since the industrial revolution. It is also an important offset considering the widely accepted target limit of 2 degrees Celsius of warming. That “limit” is in fact too high to sustain the world’s coral reefs and the livelihoods that depend on them. Reefs will fall victim to increased water temperature and acidification. Other mass extinctions and ecosystem collapses are expected as well.

The global community should aim to limit temperature increase to 1.5 degrees Celsius. That can only be achieved by protecting existing ecosystems and their diversity along with an ambitious restoration program. By funding conservation efforts implemented by civil society in the world’s biodiversity hotspots, the Critical Ecosystem Partnership Fund (CEPF) is already making a major contribution to this goal. For example, CEPF supported 7 percent of the global expansion of terrestrial protected areas during the period 2001-2010.

CEPF works with local and international experts, other funders, government officials and communities to develop and implement thoughtful, coordinated conservation strategies via the strengthening of civil society. This approach has proven highly effective.

CEPF grantees clearly demonstrate effective approaches that, when taken to scale, will help the global community address the climate challenge using nature-based solutions—solutions that also contribute to the achievement of the 2020 biodiversity targets of the Convention on Biological Diversity (also known as the Aichi Targets), and can help build necessary bridges between global climate and biodiversity initiatives. The time is right to engage the CEPF model to its full potential.​