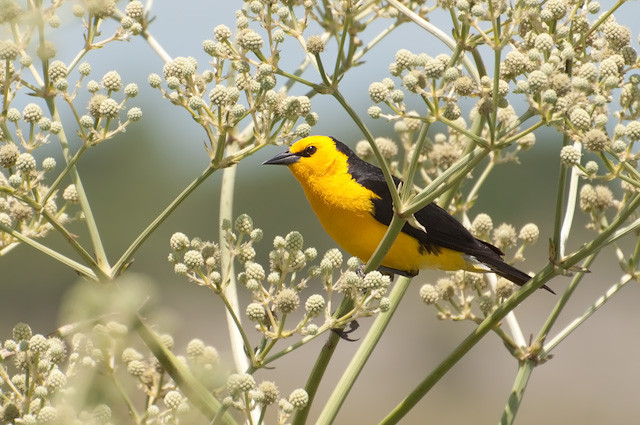 Caption:
A saffron-cowled blackbird (Xanthopsar flavus), listed as Vulnerable on the IUCN Red List of Threatened Species, in Paraguay.
Credit:
© Cláudio Dias Timm/Flickr Creative Commons
Very little of the Atlantic Forest remains, and what does is highly fragmented. Despite this, the hotspot still maintains extremely high levels of diversity and endemism.

For thousands of years the Atlantic Forest has been floristically isolated from other South American tropical forests by the surrounding savannas and woodlands, which explains the hotspot's remarkably high plant endemism—of the 20,000 vascular plant species occurring there, about 8,000 are endemic. Endemism in trees is particularly high, with more than half the species found nowhere else.

More than 450 tree species have been recorded in a single hectare of forest in southern Bahia. Two trees of great value in the timber industry are today very rare: Brazil-wood (Caesalpinia echinata) and Brazilian rosewood (Dalbergia nigra). Brazil-wood has been threatened since the early 19th century because of its value for furniture and musical instruments. Another endemic timber species, Paratecoma peroba, is approaching extinction in the region.

The Atlantic Forest has spectacular bird diversity, with more than 930 species, about 15 percent of which are found nowhere else. Because most of the region's forests have been cleared during 500 years of exploitation, many species are now threatened, and at least one is extinct in the wild, the Alagoas curassow (Crax mitu). The species was last sighted in the wild in 1987 and now exists only in a small captive population in Rio de Janeiro.

There are many unusual birds in the hotspot, including the Endangered red-billed curassow (Crax blumenbachii), which has its last stronghold in the Sooretama Biological Reserve in the Brazil state of Espirito Santo, and the Critically Endangered Brazilian merganser (Mergus octosetaceus), a flagship for the southern Atlantic Forest in Brazil and Misiones. There are also a number of threatened parrots, such as the Vulnerable red-tailed Amazon (Amazona brasiliensis) and the Endangered red-browed Amazon (Amazona rhodocorytha).

More than 70 of the 260 mammals species in the hotspot are endemic. They include species such the Vulnerable thin-spined porcupine (Chaetomys subspinosus) and Endangered painted tree rat (Callistomys pictus). The Vulnerable maned sloth (Bradypus torquatus), a larger relative of the widespread three-toed sloths (B. tridactylus and B. variegatus), is also found here.

Of the more than 300 reptile species occurring in the hotspot, approximately 95 species are endemic. About half of the nearly 20 species of Bothrops snakes present are endemic.

Amphibian diversity is very high in the Atlantic Forest, with more than 450 species recorded, more than half of which are endemic. Fifteen genera, and one entire family—the Brachycephalidae, with six species of the genus Brachycephalus—are endemic.

There are at least 350 fishes known from the Atlantic Forest streams and lakes, and 133 species and 10 of the 68 genera are endemic.