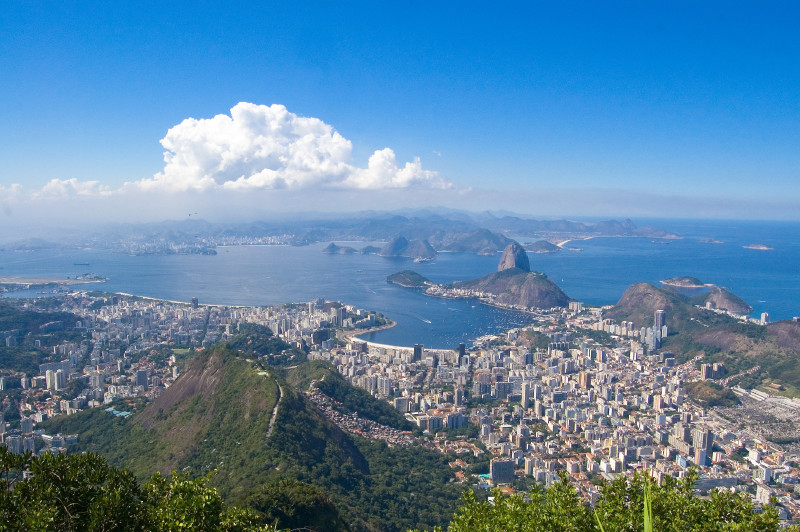 Caption:
The city of Rio de Janeiro is located within the hotspot. The Atlantic Forest is home to approximately 70 percent of Brazil's human population, putting tremendous pressure on the hotspot's resources.
Credit:
© Christoph Diewald/Flickr Creative Commons
The Atlantic Forest shelters the largest industrial and silvicultural centers of Brazil, and the most populous urban centers. Most of the natural ecosystems have already been eliminated. The vast majority of animal and plant species threatened with extinction in Brazil are represented in the Atlantic Forest. Major threats to the hotspot's biodiversity include:

Deforestation in the state of Bahia began with commercial exploitation of Brazil-wood and expanded due to agriculture and cattle grazing. The Brazil-wood was originally used in charcoal production, but more recently as building material for homes. Coffee and Eucalyptus plantations and cattle pastures are the predominant land uses in the region.

At the start of the 19th century, coffee was a cash crop in the state of Minas Gerais. Cultivation of coffee spread throughout the Zona da Mata and the Serra da Mantiqueira. Coffee plantations expanded through the forests, but were cultivated in foothills between mountain ranges, restricting native forests to hilltops. Uneven land and unsustainable cultivation techniques caused serious erosion and soil depletion. Coffee plantations then gave way to pastures, which extended to the hilltops, further fragmenting forest remnants.

In the state of Espírito Santo, coffee is a major source of income, and plantations represent a serious threat to the forest. In the 1960s, when the coffee industry was affected by declining prices, cattle grazing emerged as an alternative, causing new and extensive deforestation in the state.

Increasing human presence near forested areas is a constant threat to biodiversity, mostly due to small-scale extraction activities such as hunting; collecting ornamental and medicinal plants; capturing songbirds and ornamental birds; and poaching. Serious water pollution from untreated sewer emissions, intentional embankment of lakes, and deforestation of mangroves and restingas are also common effects of urban expansion in this area.

Most of the wood extracted in Espírito Santo is used as firewood or charcoal. Today, much of the wood used as an energy source is wood rejected by the cellulose industry; yet this is not enough to meet the demand for firewood for residential heating, and the Santa Maria and Jucu Rivers, for example, are still under intense deforestation pressure as a result.

Low income has been one of the major factors in the use of firewood in forest regions in Rio de Janeiro. In the past, exploitation of forests for charcoal production has been a serious problem in the state.

In the municipalities of Resende and Itatiaia, illegal extraction of palm heart trees has been a serious problem. Organized gangs invade and camp in the forest, transport the palm hearts, and process and sell the product. In a few days, poachers can cut down thousands of palm trees, extract the heart of palm, and pack it for transportation.

Wildlife trade affects more than 200 Brazilian species directly. These animals are exploited in local fairs, and many are typical species from the Atlantic Forest.

Hunting has also contributed to the decline of fauna in the Una Biological Reserve and adjacent areas in Bahia. Small-scale farmers hunt more often than large-scale farmers because they have more acute subsistence needs. Although not practiced on a large scale, sport hunting has also been a problem as it contributes to local extinction.

Read more about these and other threats in our ecosystem profile (PDF - 1.6 MB), also available in Portuguese (PDF - 1.9 MB).