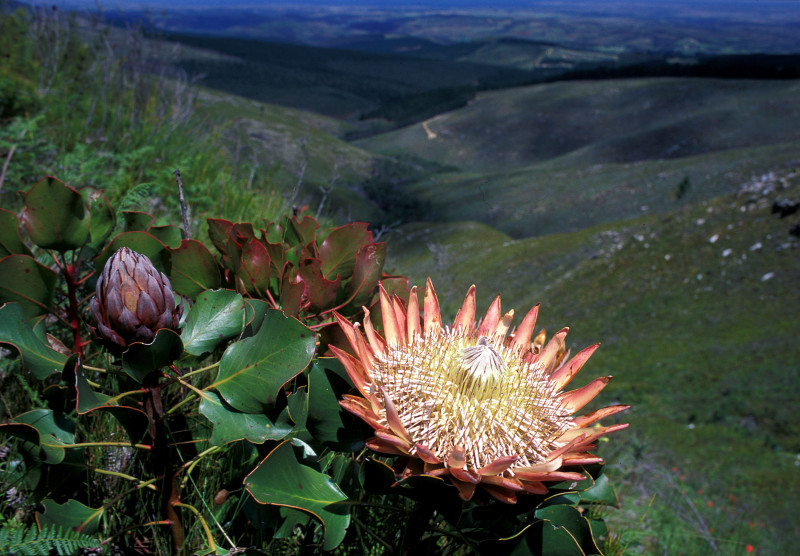 The rich biodiversity of the Cape Floristic Region Biodiversity Hotspot is due to an extensive and complex array of habitat types derived from topographical and climatic diversity in the region's rugged mountains, fertile lowlands, semi-arid shrublands and coastal dunes.

The Cape Floristic Region is home to the greatest non-tropical concentration of higher plant species in the world, with 9,000 species crammed into its small extent. Incredibly, more than 6,200 (69 percent) of these species are found nowhere else in the world. Furthermore, five of South Africa's 12 endemic plant families and 160 endemic genera are found only in this hotspot.

Among the best-recognized plant species in the hotspot are the proteas, particularly the king protea (Protea cynaroides), which is South Africa's national flower, and the red disa (Disa uniflora). Also worth a mention is the Clanwilliam cedar (Widdringtonia cedarbergensis), a graceful but declining relict conifer endemic to the Cederberg mountains in the northwestern part of the region.

The avifauna of the Cape Floristic Region is characterized by low diversity, most likely the result of structural uniformity in the vegetation and a shortage of available food. Of the 320 or so regularly occurring species of land birds here, only six are endemic. Nevertheless, the area is considered an Endemic Bird Area by BirdLife International, and is home to a number of true fynbos species such as the Cape sugarbird (Promerops cafer), the orange-breasted sunbird (Nectarinia violacea), the Protea canary (Serinus leucopterus) and the Cape siskin (Serinus totta).

While the hotspot never supported concentrations of animals as dense as the African savannas, it did once have significant populations of many of the well-known large mammals, including common eland (Tragelaphus oryx), African buffalo (Syncerus caffer), lions (Panthera leo), black rhinoceros, African elephant (Loxodonta Africana), Mountain zebra (Equus zebra), and hippopotamus (Hippopotamus amphibius). Today, however, nearly all of these populations have disappeared or have been reduced to tiny remnant groups. Two of the most interesting mammals that once lived on the Cape are now extinct: the bluebuck (Hippotragus leucophaeus) and the quagga (Equus quagga), a subspecies of the plains zebra that had no stripes on the rear part of its body. Both disappeared in the 1800s.

Today, there are about 90 species of mammals in the hotspot, four of which are endemic, including two species of golden moles: the Fynbos golden mole (Amblysomus corriae) and the Endangered Van Zyl's golden mole (Cryptochloris zyli).

Of the region's remaining large mammals, one of the most beautiful is the bontebok (Damaliscus dorcas dorcas), an antelope that, though nearly extinct in the mid-1800s, was saved by the dedication of a small group of conservationists. Today, the bontebok numbers about 2,000, and the prospects for the species' survival are quite good. The hotspot is also the home of several small solitary antelope species, including the Cape grysbok (Raphicerus melanotis).

Reptile diversity in the Cape Floristic Region is relatively high, with about 100 species, nearly a quarter of which are endemic.

South Africa itself has the highest tortoise diversity on Earth, and five species are found almost exclusively within the Cape Floristic Region, including the Critically Endangered geometric tortoise (Psammobates geometricus), one of the rarest tortoise species in world.

There are more than 40 species of amphibians in the hotspot. Sixteen of these are endemic, including the Critically Endangered Table Mountain ghost frog (Heleophryne rosei) which is found only on the slopes of famed Table Mountain.

Of the nearly 35 native freshwater fish species in the Cape Floristic Region Hotspot, more than a dozen are endemic. Some of the more distinctive fishes in the clear mountain streams of this region include the Cape galaxias (Galaxias zebratus), an elongated, scaleless fish, as well as several species of endemic redfin minnows (Pseudobarbus spp.).

Although little is known about the invertebrate fauna of the region, the few groups that have been studied suggest high levels of endemism. Of more than 230 species of butterflies, about 30 percent are endemic. One study on the Cape Peninsula found 111 invertebrate endemics in 471 square kilometers, a level higher than that of plants.

Read more about the hotspot's species in our ecosystem profile (PDF - 1.3 MB).