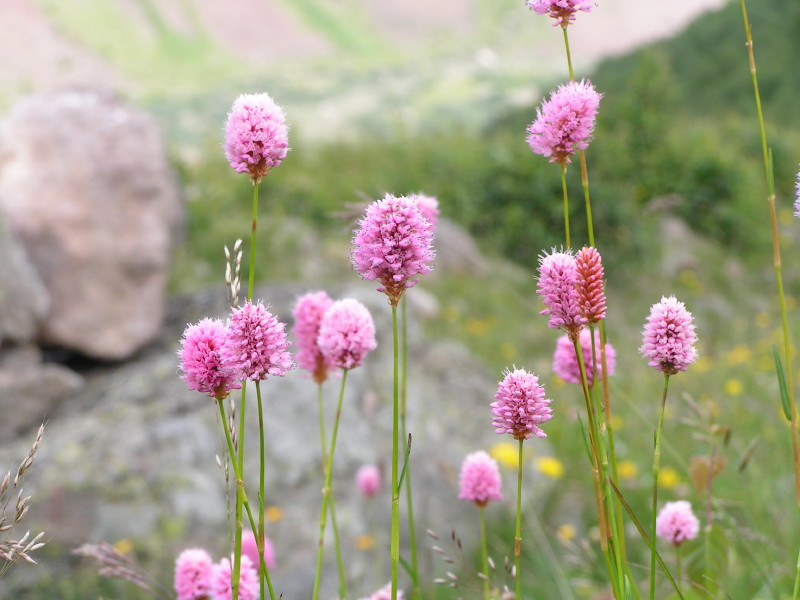 Located at a biological crossroads, species from Central and Northern Europe, Central Asia, the Middle East and North Africa mingle here with endemics found nowhere else.

The Caucasus Hotspot is home to about 6,400 plant species, more than 25 percent are restricted to the region. There are 17 endemic genera of plants here, nine of which are associated with high mountain ecosystems.

The flora of the Caucasus includes many ancient species, and many forms are still dominant or co-dominant in the hotspot's plant communities. Notable relict species include the endemic rhododendrons Rhododendron caucasicum, R. ungernii and R. smirnowii and Persian ironwood (Parrotia persica).

The region also harbors a remarkable concentration of economically important plants, particularly wild crop relatives such as wheat, rye and barley, as well as nuts and fruits like walnuts, apricots and apples.

The Caucasus contains significant numbers of breeding raptors and is an important corridor for migratory birds. Each summer and autumn, millions of birds pass through along two major migration routes on the east coast of the Black Sea and the west coast of the Caspian Sea.

There are about 130 mammal species in the Caucasus Hotspot, nearly 20 of which are endemic. Several threatened large mammal species are found here, including the Endangered Caucasian tur (Capra caucasica), a member of the goat family. The Endangered Caspian seal (Pusa caspica) also breeds along the shores of the Caspian Sea. Threatened small mammal species include the Vulnerable Mehely's horseshoe bat (Rhinolophus mehelyi), and Endangered Armenian birch mouse (Sicista armenica).

Reptiles are represented by nearly 90 species, about 20 of which are endemic. Interestingly, several of these species (such as Darevskia dahli and D. armenica) are parthenogenic, meaning that there are no males, and females reproduce entirely on their own.

Other notable reptiles include the endemic Endangered Caucasian viper (Vipera kaznokovi). The venom of this species is useful for stopping excessive bleeding in surgery patients, and the snake has been exploited for the black market trade.

Amphibian diversity is relatively low in the hotspot. The Vulnerable Caucasian salamander (Mertensiella caucasica), endemic to the West Caucasus of Georgia and Turkey, is the region's best-known amphibian species. One of the most remarkable amphibians in the Caucasus is arguably the Critically Endangered Gorgan salamander (Batrachuperus gorganensis), which is restricted to Shir-Abad Cave and the stream flowing from it in northwestern Iran.

The region has more than 125 fish species, though only about a dozen are endemic. Among the most interesting species are three lampreys: Caspiomyzon wagneri, Eudontomyzon mariae and Lampetra lanceolata. Lampreys are ancient jawless, scaleless fish that date back 280 million years and have the highest number of chromosomes of all vertebrates (164-174). Another ancient group of fish in the hotspot are seven species of sturgeon, including the Critically Endangered Beluga sturgeon (Huso huso), the largest freshwater fish and the source of high-value caviar.

Invertebrates, especially insects, are quite diverse and, in the uplands of the Caucasus, one can observe many examples of the varied insect life, including an endemic butterfly (Parnassius nordmanni) and the Vulnerable Rosalia longicorn beetle (Rosalia alpina).

Read more about CEPF's strategy in the hotspot in our ecosystem profile (PDF - 3.5 MB), also available in Russian (PDF - 4.8 MB).