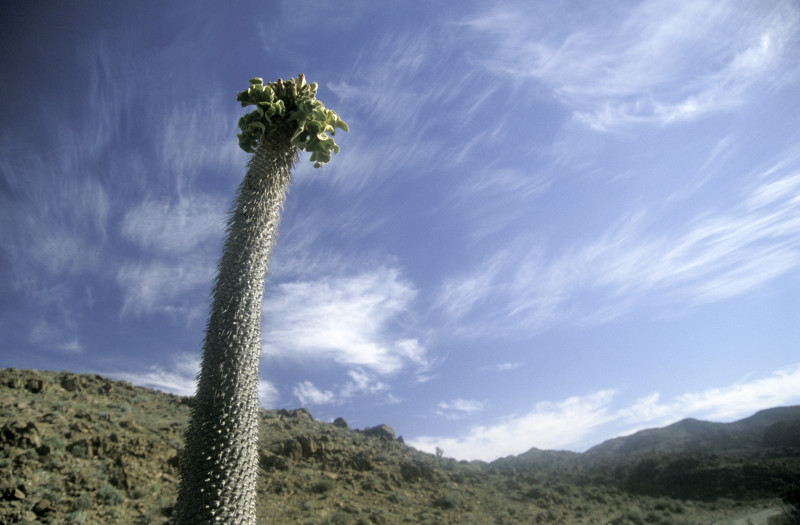 For an arid region, the Succulent Karoo has extraordinarily high plant endemism. In total, there are more than 6,350 vascular plant species in this hotspot, nearly 2,440 of which are endemic (40 percent).

Local plant species richness is very high, with an average of 70 species found in 0.1 hectare test plots, and the diversity between sites in the region is also significant. Many plants in the Succulent Karoo, especially succulents, are specialists for a limited range of environmental conditions, producing a phenomenon known as point endemism.

Notable plant species found in this hotspot include the botterboom (Tylecodon paniculatus), a stem succulent that has glossy leaves in winter and red flowers in summer, and the halfmens ("half human") (Pachypodium namaquanum), a stem succulent endemic to the Richtersveld that can grow up to four meters tall.

The avifauna of the Succulent Karoo includes more than 225 species, one of which is endemic: Barlow's lark (Certhilauda barlowi). Other species in the region include the black harrier (Circus maurus), which has the most restricted range of the world's 13 harrier species; Endangered Ludwig's bustard (Neotis ludwigii); Karoo chat (Cercomela schlegelii); and dune lark (Certhilauda erythrochlamys).

Reptile diversity is relatively high in the Succulent Karoo, with more than 90 species, about 15 of which are endemic. All of the endemics are geckos and lizards, representing about a quarter of the nearly 60 gecko and lizard species in the hotspot. These endemics include seven species of girdled lizards of the genus Cordylus, including the armadillo girdled lizard (Cordylus cataphractus), which has a heavily armored body and spiny tail and is known for rolling into a tight ball when threatened.

As in the rest of South Africa, tortoise diversity is very high here, with seven taxa, two of which are endemic: the Namaqualand tent tortoise (Psammobates tentorius trimeni) and the Namaqualand speckled padloper (Homopus signatus signatus).

Amphibians are poorly represented in the Succulent Karoo with just over 20 species. All of these species are frogs, including one endemic, the desert rain frog (Breviceps macrops), which occurs along the Namaqualand coast of South Africa north to Luderitz in coastal southwestern Namibia.

Invertebrate diversity is quite high in the hotspot, and evidence suggests that more than half of the species in some insect groups are endemic. Of the 70 species of scorpions found in the Succulent Karoo, nearly 20 are endemic.

Perhaps the most unusual invertebrates found in the hotspot are the long-tongued flies (Memestrinidae), which can have mouthparts up to 50 millimeters long. The flies are the exclusive pollinators of 28 different plant species in Namaqualand.

Read more about the hotspot's species in our ecosystem profile (PDF - 496 KB).