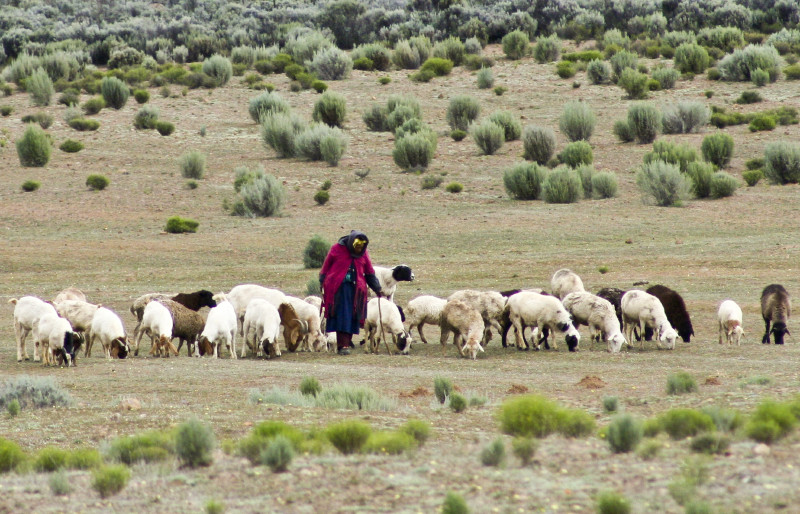 Caption:
A women in Kamiesberg, Namaqualand, brings in the sheep and goats.
Credit:
© Tessa Mildenhall
The vegetation of the Succulent Karoo is in somewhat better shape than in other hotspots. A sparse human population of only 300,000 people and the fact that more than 90 percent of the hotspot is used for natural grazing (a form of land use that is, theoretically, compatible with maintenance of biodiversity) have eased the conversion pressures on this region as compared to the other hotspots.

With that said at least five percent has been irreversibly lost to mining and agriculture, and around two-thirds of the land has been seriously overgrazed, especially in Namaqualand. Consequently, only about 29 percent, of the hotspot remains in a relatively pristine state.

Threats to the hotspot include:

The most extensive pressure on biodiversity in the hotspot is livestock grazing. Goat, sheep, ostrich and small game ranching are the dominant land uses in approximately 90 percent of the hotspot, and although stock limits and grazing plans exist for much of the hotspot, signs of overgrazing are evident over much of the landscape. This is particularly true in communal lands where motives for maintaining livestock numbers that exceed the capacity are not simply profit driven and where limited incentives and economic alternatives exist.

The entire northern extension of the Succulent Karoo is mineral rich and, with various mining applications pending throughout the region, transformation from mining operations represents a significant pressure.

Open caste and alluvial mining activities for diamonds along the coast and river flood plains have nearly transformed the entire coastline. New markets and discoveries of base metals such as zinc and copper as well as gypsum and quartz deposits continue to transform large areas of limited habitat types.

In addition to large corporations, uncontrolled prospecting by smaller companies and individuals is encroaching on the fragment patches of dune and coastal shrubland.

Although the increase in tourism to the region could certainly help create an opportunity for biodiversity conservation, it is currently having a negative impact on numerous species.

The illegal collection of succulents and bulbs is an increasing problem throughout the area. Spectacular diversity, including miniature succulents and many flowers, attract unscrupulous plant collectors who harvest without regard for the integrity of this unique ecosystem. The problem is likely to grow as the public knowledge of the region's spectacular plant diversity increases.

Read more about these and other threats in our ecosystem profile (PDF - 496 MB).