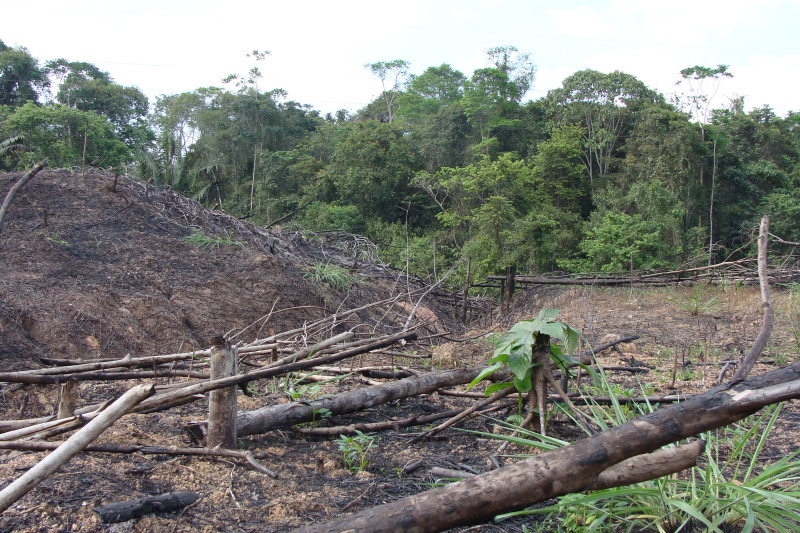 Caption:
Deforestation in Chocó, Ecuador.
Credit:
© Conservation International/photo by Michele Zador
Deforestation is a principal threat to biodiversity in the Tumbes-Chocó-Magdalena Biodiversity Hotspot. The root cause of poor forest and timber management is disorderly settlement and expansion of the agricultural frontier driven by poverty, land scarcity and population growth. The following activities are factors that contribute to deforestation:

Mestizo groups convert forested land near settlements for farming, livestock and speculation. In the Baudó River region of Colombia, spontaneous colonization is a serious problem, as some 80 percent of the forests are converted to other uses—such as slash-and-burn agriculture—and high-value timber species are harvested. In many cases, settlers invaded national park areas before the parks had been declared or established, clearing forests, mining and exploiting wildlife to the point of extinction, especially within the Tatamá, Farallones de Cali and Munchique national parks.

Unsustainable extraction is particularly serious along the western Andean slopes and terraces in mixed forests, the mangrove forests, and the Guandal and Naidi palm forests of the lowlands. In both countries, Afro-descendant and indigenous communities are poor. Many of their traditional low-impact extraction and production practices become more invasive in their efforts to make a modest living from these resources. In Colombia, antiquated sawmills waste up to 60 percent of the raw logs, limiting the potential impact of timber management there. The southwestern regions (Tumaco, Satinga and lower San Juan Rivers, and the lower Calima River) are the most affected.

Unlicensed logging has caused market failures in the region. Illegal logging is stimulated by short-term logging permits, often issued for periods of only one year, and by the practice of permitting the regional autonomous corporations to selectively extract high-value timber species. The timber sector is prone to exploitation by middlemen, who profit from the industry at the expense of the poor. While the poor carry out the logging, mainly as tree-cutters and haulers, the benefits and returns to them are minimal.

Ranching can involve large-scale conversion of forests into pasture, causing extensive ecosystem degradation and loss of habitat. In Colombia, cattle ranching takes place mainly in the Andean and sub-Andean highlands and in the cloud forests, as in Alto Calima, southern Nariño, Tumaco-Ricaurte and Cali-Buenaventura. The sub-Andean highlands of Nariño are the most affected. In Ecuador, cattle ranching contributes to large-scale forest conversion and destruction of wetlands in areas around Guayaquil.

Forests, river flats, wetlands and hillsides are being displaced by non-sustainable production of banana, plantain, cocoa, coffee and African palm, among other crops. This trend has been a major cause of habitat and species destruction, particularly in coastal Ecuador. These activities have attracted outside capital (foreign and domestic) and displaced Afro-American and indigenous populations from their traditional lands, forcing them to occupy national parks and protected areas. This has occurred in the Awá Ethnic Reserve and in the Mache Chindul Ecological Reserve in Ecuador. The results include overexploitation of land, ecosystem fragmentation and displacement of indigenous communities from their traditional lands.

Read more about these and other threats in our ecosystem profile (PDF - 1.5 MB), also available in Spanish (PDF - 1.2 MB).