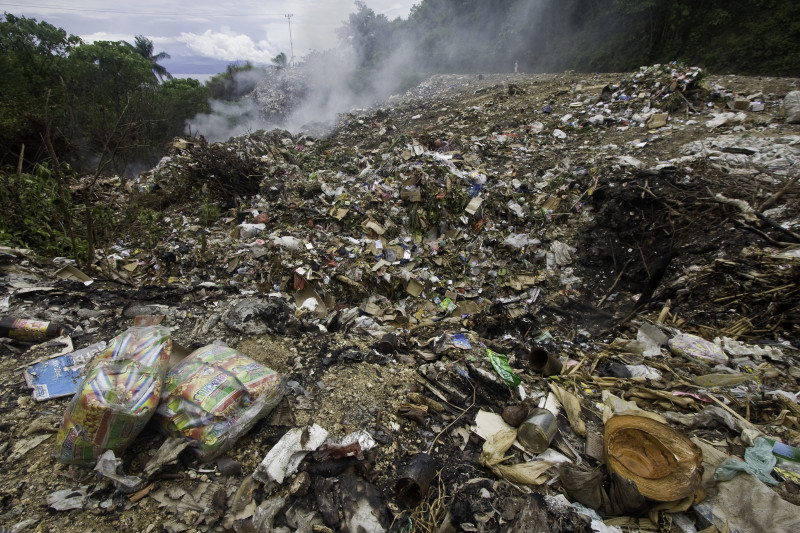 Caption:
Piles of trash smolder by the side of the road in Central Sulawesi, Indonesia.
Credit:
© Robin Moore/iLCP

Specific areas of Indonesia and Timor-Leste, Wallacea's two countries, are highly vulnerable to multiple climate change hazards. A warming climate will bring intense rainfall. Sea-level rise will threaten food security, health, water resources, farming and coastal livelihoods, and a wide variety of life forms in forests and the ocean. Other threats to the hotspot include:

Much of the logging in Indonesia is unsustainable, leading to serious forest degradation. In addition, logging roads allow smallholder agriculture and illegal logging to move in.

Unsustainable logging is driven by weak enforcement of regulations on cutting volumes and areas, which is caused by a lack of budget and trained and motivated staff to carry out inspections.

The damage caused to a forest by illegal logging—unplanned, unlicensed and unregulated—depends on the equipment used, the number of people involved, and the whether specific species are targeted. Illegal logging is not always small-scale; in the wave of illegal logging in Indonesia between 2000 and 2005, there were places where gangs of workers and trucks removed large volumes of timber.

In Timor-Leste, wood is used as fuel for cooking, fish smoking and heating by rural and urban households. Efforts to introduce liquefied petroleum gas or kerosene as an alternative have failed to make an impact.

The use of bombs and poison to catch fish is not a new threat, but has grown in intensity with population growth and the ability of fishermen to travel to more distant areas. The practices destroy the reef and biota within it and—when combined with sedimentation or seawater warming—stress the coral to the point where disease and bleaching result. Once this is widespread, recovery may be very slow, and reefs may flip to algae-dominated systems. The nonspecific nature of bombing means many fish are being taken before they are mature, leading to breeding failure and population decline.

Customary communities throughout Wallacea have long used animal and plant products as food, medicines and for a variety of household and cultural purposes. As habitats shrink, human populations grow, and access to markets opens up. This exploitation has sometimes become unsustainable, leading to the decline or local extinction of species.

In addition to capture for local consumption, Wallacea has a long history of supplying natural products that are in demand outside the region. The capture and trade of the Critically Endangered yellow-crested cockatoo (Cacatua sulphurea) is an example of a market-driven process that has reduced a once widespread bird to a handful of viable populations.

Outside the national forest estate, the expansion of industrial agriculture, predominantly for oil palm but also for sugar cane, is of increasing importance in Wallacea as a driver of land conversion. Inside the forest estate, industrial timber plantations are supposed to be planted in degraded natural forest areas, but in some cases they directly replace natural forest cover instead.

Expansion and intensification of smallholder agriculture and livestock

Despite urbanization and the growth of industry and services, Indonesian Wallacea’s human population of 30 million is still overwhelmingly dependent on agriculture (and for a subset, fisheries) for their livelihoods.

A very high percentage of Timor-Leste’s population is rural, and this is unlikely to change within this generation. The population growth rate is high, and pressure on resources is likely to increase with time.

Read more about these and other threats in chapter eight of our ecosystem profile (PDF - 3.6 MB).