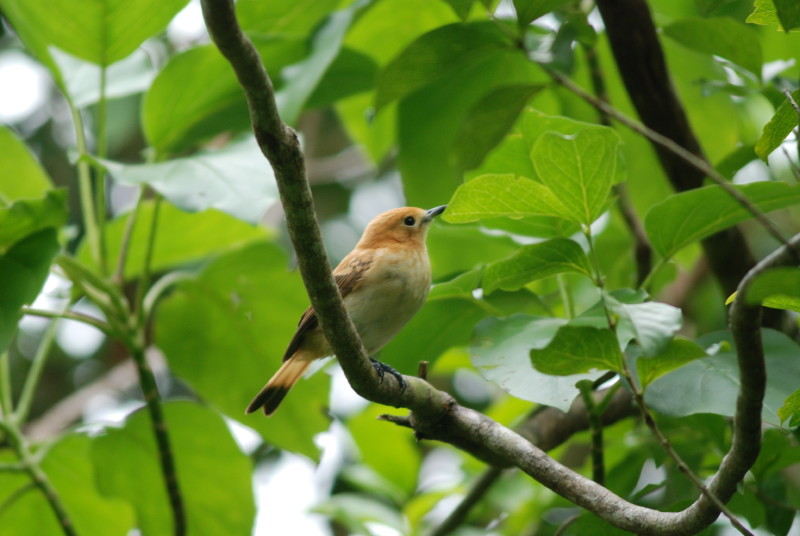 There are roughly 5,330 species of vascular plants native to Polynesia-Micronesia, of which more than 3,070 (58 percent) are endemic. One family, the Degeneriaceae, is endemic to Fiji, and includes a single tree species, Degeneria vitiensis, which is of considerable scientific interest because of its unique primitive floral characters.

Birds are the dominant terrestrial vertebrates in the Pacific, and the Polynesia–Micronesia Hotspot is home to about 290 regularly occurring species, roughly 160 of which are endemic (an additional 25 species that were endemic became extinct after the arrival of Europeans).

The Hawai'i honeycreepers, belonging to the finch subfamily Drepanididae, are one of the best-known bird groups in the region. They represent splendid examples of adaptive radiation.

The only terrestrial mammals native to Polynesia-Micronesia are 15 species of bats, of which 11 are endemic. Two other endemic bat species have gone extinct.

A single pinniped species, the Endangered Hawaiian monk seal (Monachus schauinslandi) is an endemic breeding species in this hotspot and brings the total number of mammals to 16.

There are more than 60 species of native terrestrial reptiles in the hotspot, including seven snakes, the saltwater crocodile (Crocodylus porosus) and more than 50 lizards. Over 30 reptile species are endemic.

A fascinating phenomenon among reptiles has been the spread of Lepidodactylus geckos across the region. These geckos are parthenogenic, meaning that they do not need males to reproduce, and can colonize new islands more easily than other geckos that rely on finding other individuals to reproduce sexually.

Only three amphibians are native to the hotspot, and all are ranid frogs of the genus Platymantis. Two species are endemic to Fiji, the Fiji tree frog (Platymantis vitiensis) and Fiji ground frog (P. vitiana, EN), and one, the Palau frog (P. pelewensis), is endemic to Palau. All three species are related to other Platymantisspecies in the Solomon Islands and in New Guinea.

Although there are no truly freshwater fishes in Polynesia-Micronesia, other than introduced species, nearly 100 native species are found in freshwater as adults (having pelagic marine larval stages); about 20 of these are endemic. Goboid fishes of the families Gobiidae and Eleotridae comprise the largest element of the freshwater fish fauna in the hotspot, and many of these are restricted to a single island or island group. Hawai'i has five species of gobioid fishes (four endemic), while Guam has four times as many.