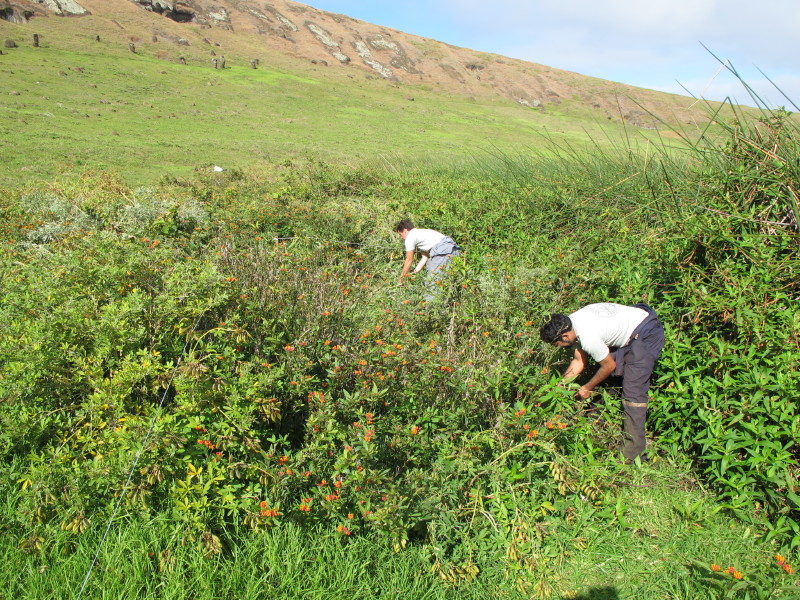 An increase in human population, commercialization, monetization and globalization coupled with the erosion of traditional knowledge about resource management have made the Polynesia-Micronesia Biodiversity Hotspot one of the most highly threatened in the world.

Invasive species (both native and non-native) are arguably the major threat to the hotspot's biodiversity. Approximately three quarters of the 476 globally threatened species in the hotspot are threatened by invasive species. This makes the Pacific islands quite unique in their conservation situation compared with other tropical regions. The major challenge is not only to control populations of existing invasive species, but also to prevent new introductions.

The impacts of invasive plants on native flora and vegetation include decreased dominance of native species, decreased overall species richness, fewer vertical tiers of plants and a lower range of biodiversity overall.

Three quarters of threatened species in the hotspot are affected by habitat alteration and loss. The primary activity that leads to this threat is the conversion of native ecosystems to non-native ecosystems for economic activities such as agriculture and logging.

Fragmentation of natural ecosystems from logging roads and agricultural plantations is a serious threat to many island species which originally had small ranges to begin with, such as plants, land snails and many invertebrates. Furthermore, research in Fiji shows that invasive predators such as rats, cats and mongooses travel into remote forests along roads but that their impact diminishes greatly more than 6km from the nearest road.

Hunting is a threat to some species on some islands such as coconut crabs (Birgus latro), fruit bats (mostly Pteropus spp.), pigeons (mostly Ducula and Ptilinopus spp.) and other large birds that are traditional food sources in many parts of the hotspot.

Some plant species are also in serious decline due to harvesting at an unsustainable level. An example is Intsia bijuga a highly valued timber tree in many countries of the hotspot. This formerly widespread tree is threatened because the wood is highly valued for carving, and is made into kava bowls in Samoa and Fiji. I

Since the impacts of weather phenomena—such as cyclones, floods, drought and fire—are part of the natural pattern in the Pacific, native species are adapted to such events and will normally recover. However, there are reasons for concern because of the reduction of the available areas of refuge. In addition, non-native animal and plant species may increase after such events, and these events may occur more frequently as a result of global climate change.

Global climate change and sea level rise may become the most serious environmental threats in the hotspot in the future. The impacts of even modest increases on atolls, which rarely exceed five meters above mean sea level, could be catastrophic to both human and non-human biota. Impacts become even more severe when consideration of other effects such as possible increases in intensity and frequency of extreme weather events such as floods, drought and cyclones are taken into account.

Read more about these and other threats in our ecosystem profile (PDF - 1.2 MB), which is also available in French (PDF - 1.3 MB).