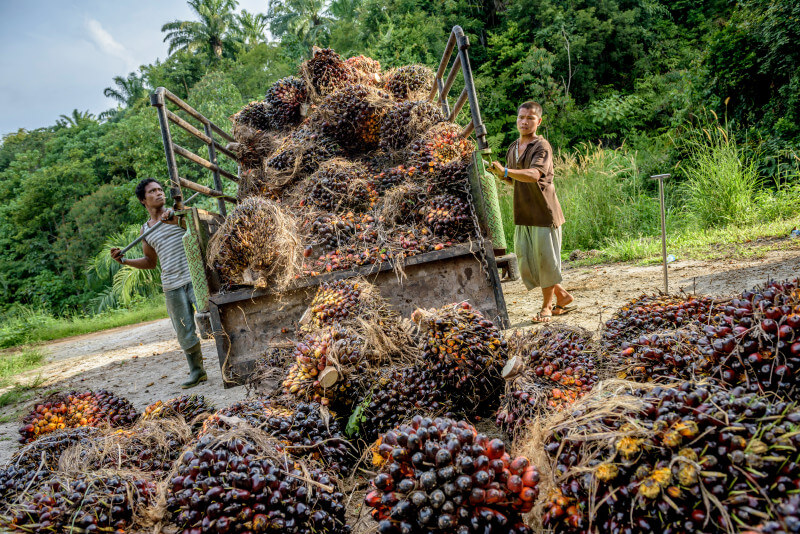 The deteriorating status of protected areas and the rapid felling of lowland forest pose the greatest threats to Sundaland's biodiversity.

Commercial logging and major agricultural projects in combination with government policies and small-scale agriculture, have made forest destruction the greatest threat to the hotspot.

Rubber production, pulp production, and commercial and illegal logging are all concerns. In Sumatra, illegal and unsustainable logging and non-timber forest product extraction are widespread, fueled by high demand from China, North America, Europe and Japan. The military and police are sometimes involved, as are paper industries, which obtain most of their wood from natural forests rather than plantations.

Oil palm plantations are also a major threat to forests in the hotspot. Increasing prices for palm oil led the government of Jambi Province, in Sumatra, to plan for the conversion of one million hectares of forest to oil palm. Furthermore, the infamous Indonesian Transmigration Program, which moved people from more crowded areas of the country, such as Java, to the less populated islands, has accelerated pressures on biodiversity in some places. Rapid road construction increases the extent and speed of deforestation, by providing access for loggers, settlers and miners.

In recent years, fires have become a major threat to the forests of Sundaland. Tropical forests do not naturally burn, but logging operations create flammable conditions by leaving fuelwood on the forest floor and by exposing the understory to drying. Fires are also sometimes intentionally lit to convert forests to oil palm plantations. Because few tropical plants are adapted to periodic fires, tropical forests are very slow to regenerate after burning. Under the intense exploitation pressure in the region, these forests may never return.

One of the most insidious threats to the fauna of Sundaland is the wildlife trade. The monetary incentives for poaching are high, while awareness and enforcement of wildlife-trade regulations is low.

Orangutan numbers were severely reduced in the past because of the pet trade. Today, pangolins and rhinoceros hornbills are among the most visible targets of hunting for the Chinese medicine market. Turtles, snakes, geckos, bears and monkeys are exported by the ton from the hotspot.

Indonesia has long been the region's leading producer and exporter of snake leather, but this trade has been surpassed by the export of live turtles to East Asia. Most turtle populations throughout the Sundaland Hotspot are either in decline or have collapsed.

Read more about CEPF's strategy in the hotspot in our ecosystem profile (PDF - 810 KB), also available in Bahasa (1.9 MB).