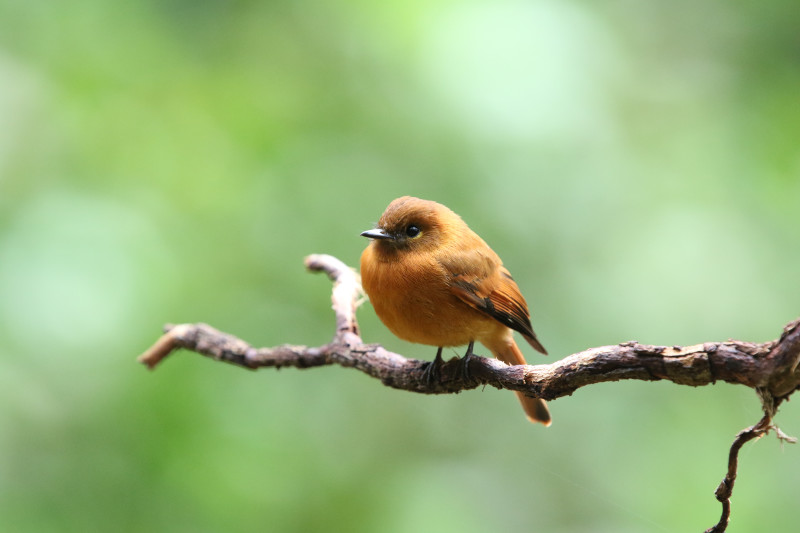 Caption:
Blue-naped Chlorophonia (Chlorophonia cyanea), Colombia.
Credit:
© O. Langrand
The Tropical Andes Biodiversity Hotspot contains about one-sixth of all plant life in the world, including 30,000 species of vascular plants, making it the top hotspot for plant diversity. It has the largest variety of amphibian, bird and mammal species, and takes second place to the Mesoamerica Hotspot for reptile diversity.

Investigation into the global threat status of Andean plants is only beginning. So far no group of Andean plants has been comprehensively assessed and published on the IUCN Red List of Threatened Species.

One group of coldwater fishes are in the pupfish genus Orestias, which is represented by more than 40 species in Lake Titicaca and nearby drainages. All but a few of the 90 species of naked sucker-mouth catfishes in the family Astroblepidae are also endemic to the Tropical Andes. These remarkable animals can use their sucker-like mouths and modified pelvic fins to climb waterfalls in fast-flowing mountain streams.

The pencil catfish (genus Trichomycterus) are an Andean group that are typically restricted to a single drainage and may be the only fish species that can live in their high-elevation habitats.

The Andes is by far the most diverse region in the world for amphibians, with approximately 980 species and more than 670 endemics. These numbers are almost double those of the next most diverse hotspots for this group, Mesoamerica and the Atlantic Forest. Amphibians represent more than half of all threatened species in the hotspot.

Some well-known amphibians from the Tropical Andes include the marsupial frogs of the genus Gastrotheca, in which the females of some species carry their eggs in pouches on their backs. The harlequin toads, genus Atelopus, are a diverse and brightly colored group that inhabits streams and wetlands in the Andes south to Bolivia. Some members of the poison dart frog family (Dendrobatidae) also occur in the Andes. One, Epipedobates tricolor, produces a compound more powerful than morphine that may serve as the source of new medicines.

With more than 1,700 species, a third of them endemic, birds are the most species-rich vertebrate group in the hotspot and represent another group for which diversity is greater in the Tropical Andes than in any other hotspot. Despite centuries of study, new bird species are continually being found in the Andes as new areas are explored and new genetic techniques improve our understanding of species limits.

Characteristic birds of the Andes include the Andean cock-of-the-rock (Rupicola peruvianus), with its brilliant coloration and exaggerated courtship displays, and the Andean condor (Vultur gryphus), one of the world's largest flying birds.

With 570 species, no other hotspot has a greater diversity of mammals. The majority of the species, as elsewhere in the tropics, are rodents and bats.

The large mammals of the Andes are remnants of a much more diverse megafaunal community that became extinct with the arrival of humans on the continent. Among them, guanacos (Lama guanicoe) and vicugnas (Vicugna vicugna) are iconic ungulates that persist in the southern Tropical Andes.

An important mammalian flagship species for the Tropical Andes is the Critically Endangered yellow-tailed woolly monkey (Oreonax flavicauda), which was believed to be extinct until it was rediscovered in 1974.