Hailing from the Americas, Africa, Asia and the Pacific Islands, the “Hotspot Heroes” have made outstanding and impactful contributions to the conservation of biodiversity hotspots 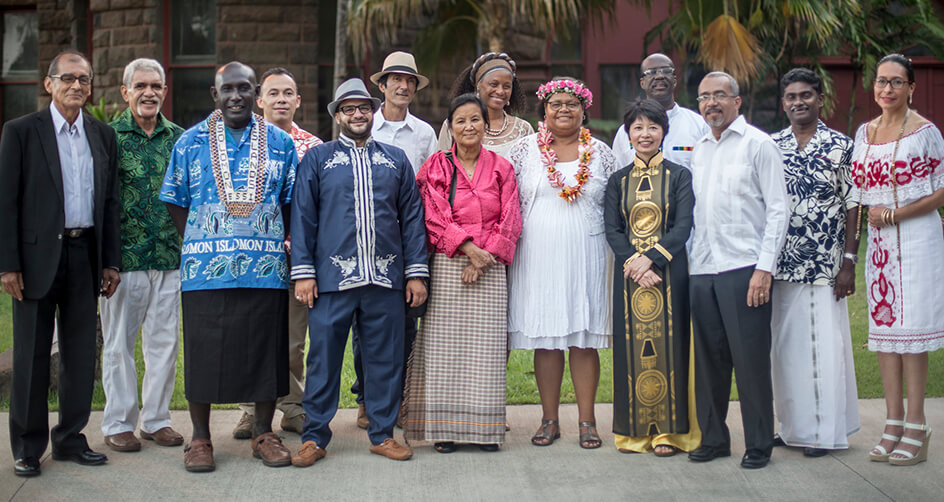 Honolulu – At the IUCN World Conservation Congress, the Critical Ecosystem Partnership Fund (CEPF) celebrated its 15th anniversary by recognizing 15 conservationists from around the world as “Hotspot Heroes.” The honorees were chosen from the more than 2,000 civil society organizations that CEPF has provided grants to since 2001 to conserve biodiversity hotspots in developing and transitional countries.

At a reception held at the Bishop Museum in Honolulu on Sunday, CEPF honored the Hotspot Heroes and the nongovernmental organizations they work for, citing their outstanding contributions to the conservation of biodiversity hotspots — the world’s most biologically diverse yet threatened terrestrial regions. The Hotspot Heroes exemplify the kinds of dedicated, dynamic people who work to ensure that intact ecosystems can continue to sustain flora and fauna and provide clean air, fresh water, healthy soils, sustainable livelihoods, resilience to climate change and much more.

“The Hotspot Heroes represent the many dedicated and dynamic individuals who are taking action every day to ensure the future of the biodiversity hotspots and the people who depend on these vital ecosystems,” said CEPF Executive Director Olivier Langrand. “They endure a multitude of challenges — very long hours, grueling travel, difficult working conditions, political hurdles and even threats to their lives — in pursuit of a healthy, sustainable world.”

CEPF is a joint initiative of l'Agence Française de Développement, Conservation International, the European Union, the Global Environment Facility, the Government of Japan, the MacArthur Foundation and the World Bank. CEPF provides grants to civil society organizations in developing and transitional countries and territories that are in biodiversity hotspots. Each of the hotspots holds especially high numbers of flora and fauna species found nowhere else, faces extreme threats and has lost at least 70 percent of its original habitat extent.

“The birth of the Critical Ecosystem Partnership Fund was a transformative and innovative way to address the challenging and monumental task of protecting nature and our future on this planet,” said Peter Seligmann, Chairman and CEO of Conservation International. “As one of CEPF’s founders, I have been amazed to watch the simple idea that is CEPF — supporting local communities and peoples in conservation of biodiversity — catch fire and have a global impact. After 15 years, the legacy of CEPF is truly astounding. It has mobilized major actors across global sectors to channel nearly $200 million of conservation funding to civil society organizations, but there remains much work to be done. CEPF’s past success and future vision provide a model for how the private sector and civil society can come together with governments to protect the nature that benefits us all.”

One Hotspot Hero, Milagre Nuvunga of Mozambique, works with communities near the Chimanimani Mountains on resource management, including documenting local species distribution.  “Local communities are our entry point,” said Nuvunga, co-founder of Mozambican nongovernmental organization MICAIA. “We are helping them identify areas where they will conserve biodiversity, because we want to make sure that whatever development decisions they make are sustainable.”

CEPF AND ITS GRANTEES: GLOBAL RESULTS

Hotspot Heroes are among the many individuals working with civil society organizations to protect the world’s biodiversity hotspots and the vital services hotspot ecosystems provide. CEPF is proud of the more than 2,000 civil society entities it has funded since 2001, and what they have accomplished with that support. With more than US$196 million in grant funding from CEPF, grantees have leveraged an additional US$ 350 million to conserve Earth’s biodiversity hotspots. CEPF grantee organizations have:

Read more about all the Hotspot Heroes here.

About the Critical Ecosystem Partnership Fund:

CEPF provides grants to and builds the capacity of nongovernmental and private-sector organizations around the world that are working to protect biodiversity hotspots — some of Earth’s most biologically rich, yet threatened, regions — and to improve human well-being. Visit us at www.cepf.net, Facebook and Twitter​.​