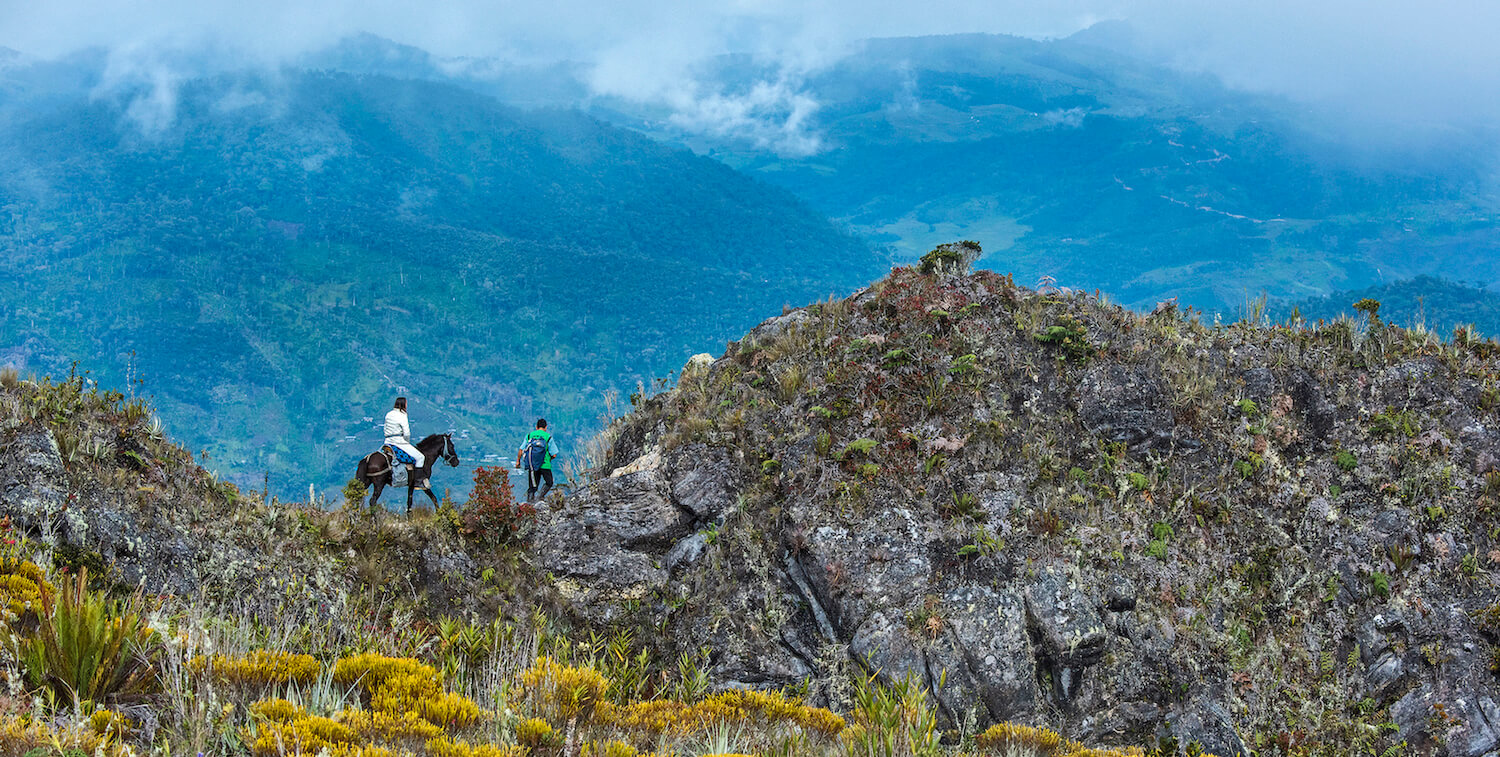 Caption:
Visitor with guide in a protected area in the Campesino community of Corosha, Amazonas, Peru, part of the Tropical Andes Biodiversity Hotspot.
Credit:
© Michael Tweddle

In a landmark year for biodiversity conservation, L’Agence Française de Développement and the European Union reinvest in the Critical Ecosystem Partnership Fund

The funds will be used for grants that empower locally led conservation of biodiversity hotspots—Earth’s most biologically rich yet threatened terrestrial areas, which provide essential services such as fresh water, food, clean air, carbon storage that limits climate change, and more.

Founded in 2000, CEPF has awarded more than US$244 million in grants to more than 2,400 civil society entities—nongovernmental organizations, community and indigenous peoples groups, universities and private enterprises—in 98 countries with developing or transitioning economies. Results include the establishment of more than 15 million hectares of formally protected ecosystems and improved management of more than 45 million hectares, and benefits to more than 3,100 communities and over 880 IUCN Red List species.

"Halting the loss of biodiversity and protecting ecosystems are crucial objectives that support all the basic services humanity needs,” said Gilles Kleitz, Director of the Department of Ecological Transitions and Natural Resources, L’Agence Française de Développement. “Efforts in this direction must be intensified, especially since species-rich ecosystems are powerful tools in the prevention of, and adaptation to, climate change. We urge other donors to do more to conserve the world’s biological diversity, which is a necessary part of the equation if our planet is to withstand the stresses of climate change and the demands of supporting a population of 7.8 billion people and growing.”

A recent U.N.-backed report on global biodiversity found that up to 1 million species are threatened with extinction, many within decades. According to the report, issued by the Intergovernmental Science-Policy Platform on Biodiversity and Ecosystem Services (IPBES), land degradation has reduced the productivity of 23% of the global land surface, and up to US$577 billion in annual global crops are at risk from pollinator loss. Additionally, 100-300 million people are at increased risk of floods and hurricanes because of loss of coastal habitats and protection.

In October 2020, the signatories to the U.N.’s Convention on Biological Diversity will meet in China to discuss the urgent need for more action on biodiversity conservation, and to set new global targets. This meeting and other events set for this year have many in the environmental community referring to 2020 as the “biodiversity super year.”

“We are facing an ecological emergency, and the risks of nature loss for humanity are alarming. However, it is possible to halt and reverse this trend,” said Chantal Marijnissen, Head of Unit, Environment, Natural Resources and Water at the European Commission’s Directorate-General for International Cooperation and Development.

Together with its member states, the European Union is the world’s biggest financial donor for biodiversity conservation. A 2015 opinion poll found that at least three quarters of Europeans think there are serious threats to animals, plants and ecosystems at a national, European and global level, and more than half think they will be personally affected by biodiversity loss.

“We thank L’Agence Française de Développement and the European Union for their continued support, and their leadership on global biodiversity conservation,” said CEPF Executive Director Olivier Langrand. “They, and our other donors, recognize the urgency of bolstering species populations and biologically rich ecosystems as we map out a sustainable future. And we thank our grantees as well—people in the biodiversity hotspots who are bravely taking the lead in protecting their nature and their communities.”
###

About the Critical Ecosystem Partnership Fund

Biodiversity is fundamental to a healthy planet and thriving communities, but the world's species are under extreme threat. The Critical Ecosystem Partnership Fund (CEPF) fills a unique, strategic role in addressing the extinction crisis by mobilizing and empowering civil society—nongovernmental organizations, communities, indigenous peoples, universities and more—to protect the world's biodiversity hotspots. Learn more at www.cepf.net, Facebook, Twitter and LinkedIn.