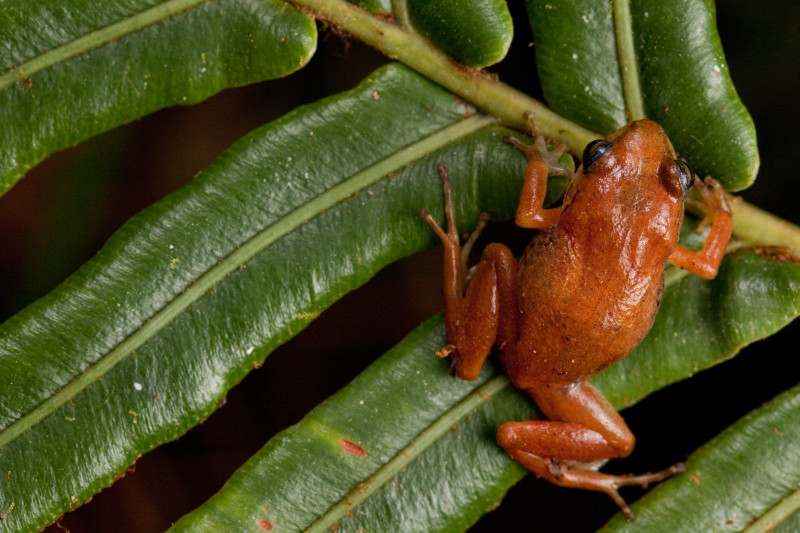 Despite their small land area, the Caribbean Islands support one of the highest numbers of globally threatened species of any hotspot in the world. The hotspot is considered to be of very high importance for global amphibian conservation due to the high rates of speciation and endemism, and exceptionally high levels of threat.

All 200 native amphibian species in the Caribbean are endemic, many to single islands. This number is likely to increase as more research is undertaken in more remote areas of the region, particularly in the Greater Antilles.

Eleutherodactylus iberia from Cuba is one of the smallest tetrapods in the world, at less than 1 centimeter in length. At the other end of the scale, the mountain chicken (Leptodactylus fallax) from Montserrat and Dominica is, at 16 centimeters, one of the largest of all frogs.

This species is one of the many amphibian species to fall victim to an infectious disease caused by the chytrid fungus Batrachochytrium dendrobatidis and, compounded by the historical impacts of habitat loss, invasive species and exploitation, is rapidly declining toward extinction in the wild on both islands in one of the fastest ever range-wide species declines recorded.

Recent efforts have brought the mountain chicken back from the brink of extinction, but its situation remains tenuous. The disease has also been implicated in the rapid declines and possible extinctions of a number of Eleutherodactylus species in Puerto Rico, the Dominican Republic, Haiti and Cuba. Alongside disease, amphibians in the region face threats from invasive species, habitat loss and fragmentation.

Historically, the Caribbean Islands Hotspot supported 127 terrestrial mammal species, of which 23 are now considered extinct. Today, 25% of the 104 mammal species occurring in the hotspot are globally threatened.

The family Capromyidae is the most diverse, with 10 living species, seven of which are found in Cuba. Two of the Cuban endemics are considered Possibly Extinct: the dwarf hutia (Mesocapromys nanus) and little earth hutia (M. sanfelipensis).

Bats are very important to ecosystems in the Caribbean Islands Hotspot and are represented by 59 species. However, bats are in urgent need of research to better understand their distribution, ecology and current threat status. These species are sparsely distributed and difficult to find due to the limited number of suitable caves or old-growth (native) trees appropriate for roosting.

Of the 565 known bird species in the Caribbean Islands Hotspot, 55 are currently listed as globally threatened, 48 of which are confined to the hotspot and 12 of which are considered Critically Endangered. These include the ivory-billed woodpecker (Campephilus principalis), Ridgway’s hawk (Buteo ridgwayi) and Grenada dove (Leptotila wellsi).

At least six species of Caribbean birds have gone extinct over the last 500 years, including four species in the Psittacidae (parrot) family. The Cuban macaw (Ara tricolor), the last of the four species to disappear, was hunted to extinction for food and the pet trade during the second half of the 18th century.

Although endemism is most notable at the species level, a remarkable 36 bird genera are endemic to the hotspot as well as two endemic families: Dulidae and Todidae.

Only a single individual of the Endangered Bahama nuthatch (Sitta insularis) has been found since Hurricane Matthew hit Grand Bahama in 2016, affecting the only known locality for the species. The nuthatch could, therefore, become the next bird species extinction in the Caribbean.

With more than 600 native species, about 82% of which are endemic to the region, the Caribbean Islands Hotspot is rich in reptiles. Since the last CEPF ecosystem profile was published in 2010, at least 39 new species have been described, including several skinks and anoles and one boa.

Many of the hotspot’s species are endemic to a single island and may be already extinct or close to extinction. These new species have not yet been formally assessed under the IUCN Red List of Threatened Species criteria, and other taxa are still in the process of being formally accepted as new valid species.

Four sea turtle species nest in the Caribbean. Some authors have estimated that, in the Caribbean, these species once numbered in the millions. So abundant were they that mariner reports from the 17th and 18th centuries document flotillas of turtles so dense and so vast that net fishing was impossible; even the movement of ships was impeded.

Today, sea turtle populations are severely reduced from these historical levels, and some of the largest breeding populations have vanished.

The botanical diversity of the Caribbean Islands Hotspot is extraordinary. While the land areas are relatively small, the islands support a native flora of 1,520 genera and about 11,000 species of seed plants. Of these, 192 genera and 7,868 species (72%) are endemic (or nearly so) to the hotspot.

When the 2010 ecosystem profile for the Caribbean Islands was completed, 438 species of plants were listed as globally threatened. Since then, 75 more species have been added, making a total of 124 Critically Endangered, 159 Endangered and 230 Vulnerable species.

Endemic plant genera are concentrated in the Greater Antilles, especially Cuba and Hispaniola: the largest and most heterogeneous islands.

The Caribbean Islands Hotspot supports 167 species of freshwater fish, about 65 of which are endemic to one or a few islands, and many of these to just a single lake or springhead.

As in other archipelagic hotspots, there are two distinct groups of freshwater fishes in the Caribbean. On smaller and younger islands, most fish species are widespread in marine waters but also enter freshwater to some degree. Meanwhile, on the larger and older islands of the Greater Antilles, there are several groups that occupy inland waters, including gars, killifishes, silversides and cichlids.